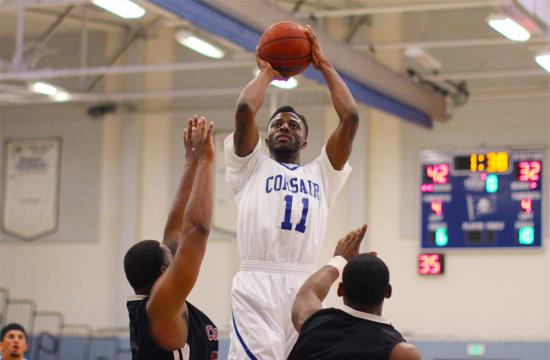 With the score 94-90 and under two minutes to play in the fourth quarter, the Santa Monica College (5-4) bench was quiet as they were witness to what could have been an upset comeback by the El Camino-Compton Center Tartars (4-4) at home Saturday afternoon.

The Tartars were down 93-71 with 4:23 remaining in the fourth quarter, but El Camino-Compton Center’s guard Chris Miller refused to let the game end in a blowout fashion scoring 28 points in the second half and lead an amazing 19-1 Tartars run against SMC before the Corsairs were able to recover and win the game 105-97.

SMC forward David Nwaba played a large role in the win, and under his leadership the Corsairs found themselves winning by a hundred plus points for the first time this season.

“We played a better game today,” said Nwaba. “From our last game coming off of a loss, we had to step it up just a little bit and be more aggressive to the rack but still avoiding the charges.”

The game began close but after Nwaba dunked the ball off a steal from guard Adam Griffin, Nwaba was able to slide in two more points on a layup during the Corsairs next possession to extend the lead of the Corsairs 16-8.

Keilan Horton sank a basket to extend the lead of the Corsairs 22-13.

But Miller was on fire hitting a trio of three point shots to keep the Tartars in the game cutting SMC’s lead to two points at 24-22 by the middle of the first quarter.

The Corsairs regained their composure after Nwaba dunked on the Tartars once again to make the game 30-24.

Griffin added a three-point shot to sweeten the deal and Nwaba put in another bucket to extend the 12-6 run to make the game 36-28 and the run proved costly to the Tartars in their loss to the Corsairs.

Next game for the Corsairs is against LA Harbor at home Thursday Dec. 20 at 5:30 p.m.