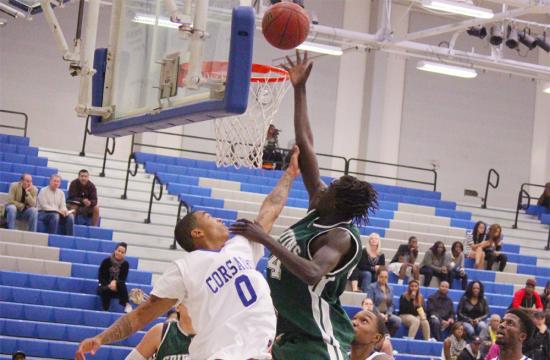 Grossmont forward Robert Romero thought that the Griffins came out with a lot of intensity to beat the Corsairs.

“We took good shots and didn’t turn the ball over and that helped us out tonight,” said Romero.

Pivotal moment for the Corsairs against the Griffins came with the game at 19-16.

Romero had just gotten a rebound and the ball was passed around until it got to Trevon Ash on the wing. Ash went to the basket, got fouled, and made two free throws to put the Griffins up 21-16.

The Corsairs responded, with Corsairs Center Admassu Williams driving hard to the basket and even though he was fouled, he still scored two points to cut the Griffins lead to 21-18.

After the Corsairs defense got the ball back from the Griffins, forward David Nwaba powered in a basket under the hoop to cut the lead of the Griffins by one point at 21-20.

But that was as close as the Corsairs would get to the Griffins, and by the end of the first half the score was 40-30.

Next games for the Corsairs are home against El Camino Compton Center Saturday, Dec.15 at 3 p.m. and against LA Harbor Thursday, Dec. 20 at 5:30 p.m.