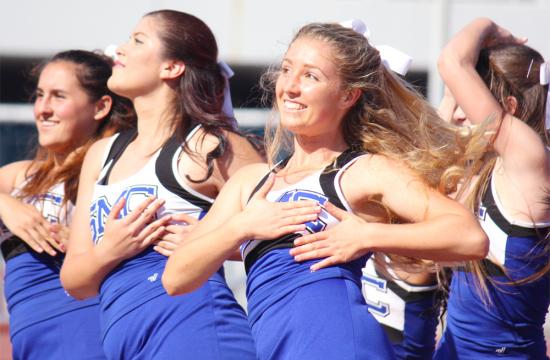 Santa Monica College Cheerleading has taken on a different note this year and is working to transform itself from a novice pep-squad into a full blown cheer squad that will prepare students to cheer at big name colleges like San Diego State, UCLA, and Northridge.

“Before I came to the program, collegiate stunting was pretty much non exist ant and when collegiate style stunt was put up, the technique was awful,” said Bensing. “I am teaching them proper technique to make sure they stay safe.”

Head cheerleader MacKenzie Lee was excited to have participated on the Fall 2012 cheer team.

“Cheerleading was a great experience,” said Lee. “Everyone on the team was very kind and I made lots of new friends. I wanted to be really involved in stunts, which I got to be.”

Lee is both a dancer and a SMC track and cross country athlete who decided to enroll in cheer because she believed that she could combine and advance her athletic talents on the cheer team.

“I’ve been an athlete my entire time life, but what I miss in playing sports is artistry,” said Lee. “Cheerleading is both athletic and artistic.”

Bensing has a goal to transform the SMC cheer program into a “legit college team” and is striving to do that by filling his ranks with cheerleaders like Lee who also have dance experience.

“As the crowd has already noticed, the team looks better then they ever have,” said Bensing. “My goal is to make this program into a legit college team. I will do this by taking students with cheer and dance experience, and taking creative to a new level, recruiting and competing the team in the near future.”

Lee considers herself “lucky” to have found an outlet for her talents as well as receiving physical education credit for studying cheerleading.

“Many times I would be basing some new crazy pyramid sequence coach was choreographing for us, and as difficult as it was, all I could think of was how lucky I was to be on this team and cheering, ” said Lee. “How many college students get to perform acrobatics for P.E.? I think we are all pretty lucky, and I’m glad I’ve gotten to do it.”