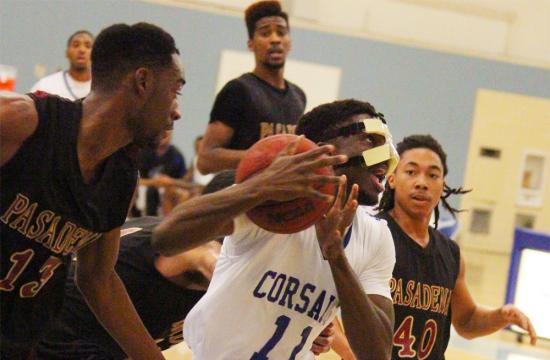 Santa Monica College (3-2) defeated Pasadena City College (1-5) 87-70 in an intense match-up Friday, Nov. 30 where the players off the bench lifted the Corsairs to victory over the Lancers at home.

Corsairs Basketball Head Coach Jerome Jenkins said he was proud of the way SMC came together in the second half to pull off the win.

“We wanted to go beat somebody and we were really able to turn it up in the second half,” said Jenkins. “It was almost like a prize fight where we were during the first half we were able to feel each other out, and I told the team I felt like this was the best they could give us and that we could play better. We focused in on we do best and that is play defense and our defense creates our offense.”

The game was close during the first half. The score was tied up 28-28 after a bucket by Lancers guard Mike Swanegan with 3:04 remaining in the second quarter.

Corsairs forward David Nwaba was fouled on the Corsairs next possession as he drove to the basket putting him on the line to shoot two free throws.

SMC guard Kellan Hortan then sunk a three pointer to make the game 33-29.

Swanegan scored again to close the gap 33-31, but Hortan and Nwaba teamed up for the next two buckets to make the game 37-31 at the half.

The Corsairs held on during the second half to win the game 87-70.

The bench was strong for the Corsairs against the Lancers with Nwaba finishing 8-10 with 19 points off the bench and J’Ryon Moss 8-10 with 16 points.

“We forced them to 22 turnovers and I think that was key,” said Jenkins. “I think it was good to have David Nwaba back from the broken nose. It kind of put everybody at ease because he’s our guy, so having him back on the floor helped us feel more comfortable and good about ourselves. Overall, I think it was a collective effort. We just want to be a scrappy team and collectively beat you.”

Next game for the Corsairs is against LA Valley College at home Friday at 5 p.m.