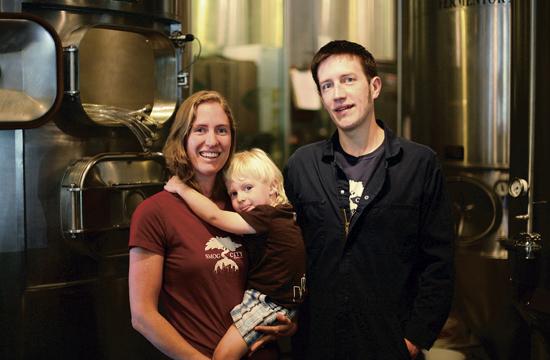 For Jonathan and Laurie Porter, the dream of running their own brewery has become a reality in a blink of an eye. The demand for their beer is increasing, awards are being won, and a new brewing facility that’s currently under construction couldn’t come quick enough for the entrepreneurial couple.

Their label called Smog City, which is based in Torrance, has been brewing and distributing for a little over a year with permanent handles in Santa Monica at Fig restaurant inside the Fairmont Miramar Hotel and Curious Palate at Santa Monica Place.

Jonathan said his love of craft (or well crafted) beer goes back about 13 years when he was living in Philadelphia exploring all the Belgian and local craft beers he could find.

In 2005, after three years of home brewing, he decided that getting into the brewing industry was something he wanted to do.

“I always wanted to work for myself and with my wife so starting our own brewery just made sense after a few years working in breweries,” he said.

Jonathan said their L.A. Saison brew was unique in the fact that it is one of the only year round farmhouse style ales produced locally, adding it is extremely food friendly and produced with that in mind.

He said their Smog City XPA is a lower alcohol (4.8% ABV) yet highly hopped ale that gives people who love the stronger, hoppier beers something that is equally as hoppy but more sessionable.

He said their Groundwork Coffee Porter was developed with the goal of creating an intensely coffee forward beer that remains balanced with the flavor of the base beer.

“We tried dozens of coffee varieties from multiple roasters before coming up with the exact combination we use now,” he said. “I think that the key to our beer is balance – whether it’s an intensely hoppy Hoptonic IPA, or a rich chocolate imperial stout as The Nothing, we strive for drinkability and balance.”

Laurie said they planned on expanding their number of locations in Santa Monica, but for the time being they have kept their availability small and exclusive.

“Smog City is a small batch production brewery and therefore it is imperative that we selectively place our beers where they will reach the most craft beer drinkers and foodies,” she said. “Our new facility is currently under construction but as soon as that is completed we will be expanding our accounts in Santa Monica and throughout Los Angeles County.”

The couple said they are excited about their new facility, which is currently under construction after breaking ground in November.

It is a 5500 square foot warehouse space in Torrance, just off Western Avenue on Del Amo Boulevard.

The brewery will be a production facility with taproom for the public to visit, tour, and drink Smog City beers.

Laurie said it would offer an opportunity for fans and fans-to-be to meet them and ask questions.

“We consider this not too dissimilar to the farm to table or farmer’s market mentality – meet your supplier and see where the beer is made,” she said. “It’s really quite exciting for them and us.”

The couple hopes to open the new facility sometime around March 2013.

In the meantime, they are brewing at the Tustin Brewing Co. where Jonathan is also the head brewer and through negations with the owner, Jason Jeralds, were able to establish their own Smog City brand.

“We have been brewing out of Tustin for a little over a year but with the success of Smog City and the increased business at Tustin Brewing Co, we reached our brewing capacity very very quickly,” Laurie said. “About 10 months ago we began looking for a new location and it has taken all this time to get to where we are now. Tustin Brewing Co is a brew pub and will continue to function as it has for the past 16 years and serve beers created by Jonathan even after he moves on to run Smog City Brewing full time.”

Right now Smog City only brews draft beer, but the couple said they do intend to offer their premium beers in 750ml bottles sometime down the road.

The couple has participated in several tasting events in Santa Monica this year including the Localicious event Nov. 4 that was part of the Good Food Festival & Conference and the first annual FIG Restaurant Sausage Fest on Oct. 7.

As a new brewery, the couple recently brought home a Gold medal from GABF – The Great American Beer Fest held annually where the best beers of the nation are recognized.