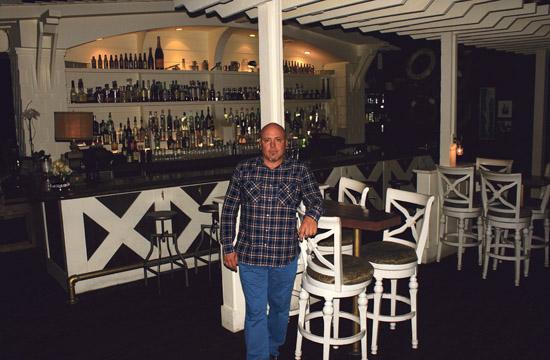 On this side of Santa Monica’s north border near the Pacific Coast Highway is SHOREbar, one of the newest hot spots in town after opening in June.

Designed by John M. Sofio, the bar at 112 W. Channel Road off the PCH between Santa Monica and Malibu has been given a new lease on life and has a vibe that’s a far cry from its days as The Hideout.

Sofio said the new owners hired him as designer of the project two months prior to its grand reopening.

“Since it was an existing space, it was a light remodel focused on finishes rather than any real infrastructure changes because it was a bar already,” Sofio said. “It was previously called The Hideout, which was a beat down bar with no booths or no real décor. To be able to start thinking about the space, the first thing we did was stripped it down, cleared the space, and painted it dark blue so its former red interior wasn’t so glaring.”

Sofio said he set out to incorporate a regional and localized theme.

He said he was inspired by Catalina Island and its nautical theme to design the venue, as well as drawing inspiration from other local seaside haunts such as Jonathan Beach Club and Shutters Hotel.

“We went out to Catalina and took photos of the Tuna Club and we walked the Santa Monica Beach and took some cues from there,” he said. “I also took cues from Malibu and the Malibu Pier.”

He added a nostalgic vibe by sourcing vintage photographs of local coastal ports and various memorabilia.

“To get the photographs and the nautical lights, we scoured the Rose Bowl flea market and we also went down to the Long Beach flea market,” he said. “We also have some antique stores that we typically go to in Pomona and Orange County and we were able to get all of those images as true vintage photographs as opposed to copies.”

Along the length of the wall opposite the bar are a number of booths that are all unique, Sofio said.

“Each of the booths have a tie to one of the local ports – Santa Monica, Los Angeles, Newport Beach, and Catalina Island,” he said. “We put a map, photograph, and a label at each of the booths.”

The décor also includes framed photographs not only of sailboats, but images such as the deck of the Titantic to add to the nautical theme.

Sofio said he sourced old brass lamps that were formerly used on ships, but he said his greatest find was a vintage map of Baja.

“That was from 1972,” he said. “It just felt like the right thing. It was almost a little bit too precious to put into a bar, but we located it closer to the back of the bar.”

Sofio created his design/build firm “Built” in 1996, which is based in Silver Lake. He has developed about 500 projects through Southern California, New York, and Florida.

He said SHOREbar marked his first commercial project in Santa Monica, which was a small project in terms of space compared to his other regional projects.

Upstairs there is a members-only private space, Sofio said.

“Each member gets their own locker, and we built those lockers into the wall to give them that beach club exclusive feel,” he said. “Overall, the bar has been very successful as far as response from the public.”