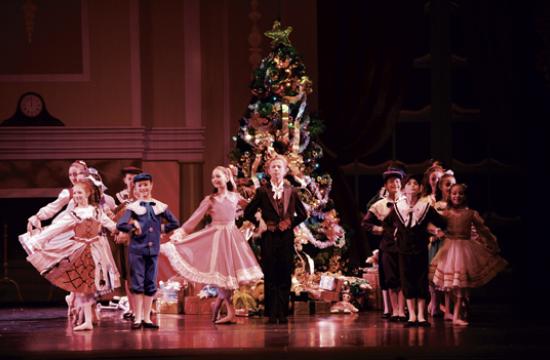 Westside Ballet of Santa Monica returns its annual holiday classic “The Nutcracker” this weekend (Dec. 7-9) at the Wadsworth Theatre at 11301 Wilshire Boulevard in Brentwood.

Based on E.T.A. Hoffman’s “Nutcracker and the King of Mice,” Westside’s Nutcracker is the traditional, full-length ballet, set to Tchaikovsky’s majestic score, with exuberant choreography and lavish costumes.

Artistic direction closely follows that of George Balanchine’s original version, passed on by the late and legendary Yvonne Mounsey, who created the Nutcracker role of Center Spanish during the peak of her career as principal dancer with New York City Ballet.

Mounsey passed away at age 93 two months ago on Sept. 29.

Westside Ballet of Santa Monica draws its company from the affiliated Westside School of Ballet, featured in Point Magazine as one of seven leading ballet schools in the country.

Students have gone on to distinguished careers with top ballet companies, including New York City Ballet, American Ballet Theater, and many more.

The 2012 Nutcracker will also feature guest artist Joy Womack as the glittering Sugar Plum Fairy in three of the five shows.

Womack began her training at Westside School of Ballet and recently became the first American female to be invited into the renowned Bolshoi Ballet Company.

“I’m really looking forward to learning the Balanchine choreography, going back to my roots,” Womack said. “Although my variation will be Russian.”

This year’s Nutcracker is dedicated to the memory of Yvonne Mounsey who was the Westside Ballet of Santa Monica’s beloved Artistic Director.

Mounsey achieved her greatest acclaim as a dancer in the early 1950’s as the bewitching Siren in Balanchine’s “Prodigal Son.”

Other notable roles performed by Mounsey include the Queen in “The Cage” and the Harp in “Fanfare.”

From 1973 to 2011, Mounsey oversaw Westside’s annual Nutcracker, teaching dancers the same choreography and dance techniques she learned directly from the great George Balanchine.

Womack said Mounsey was a role model when she was growing up and starting to dance.

“She would say in class ‘you have to do everything full out and you have to dance all the time in class, no matter what happens,’” Womack said. “She taught me to enjoy dancing and express my emotions and that was the thing that set me apart in Russia. I was able to keep those corrections and use them.”

Womack said Mounsey encouraged her that dancing was her career.

“My parents were skeptical at first but after talking to Yvonne they were convinced,” she said. “She said that if I worked hard I could be a professional. She makes prodigies. She had a really special eye for special girls.”

At only 18, Womack had already made ballet history multiple times. Prior to joining the Bolshoi Company, she was the first American female to be invited into and then graduate from the Bolshoi Academy’s prestigious three-year Russian program. Leading her class with the highest grades, she soon became the first American ballerina to perform a principal role with the Bolshoi Ballet Academy on the Bolshoi Stage, as Lise in “La Fille Mal Gardee.”

In 2011, Womack was recipient of the Grand Prix award at the Youth America Grand Prix in Paris, France.

Womack began her training at the Westside School of Ballet in Santa Monica, under the direction of Yvonne Mounsey, until her family relocated to Texas when she was aged 12.

Currently in her first season with the Bolshoi Company, Womack said she is honored to return to Santa Monica to dance the Sugar Plum Fairy with Westside Ballet of Santa Monica, in loving memory of Yvonne Mounsey.

The Nutcracker will be performed one weekend only, Dec. 7-9 at the Wadsworth Theatre, located at 11301 Wilshire Boulevard in Brentwood.