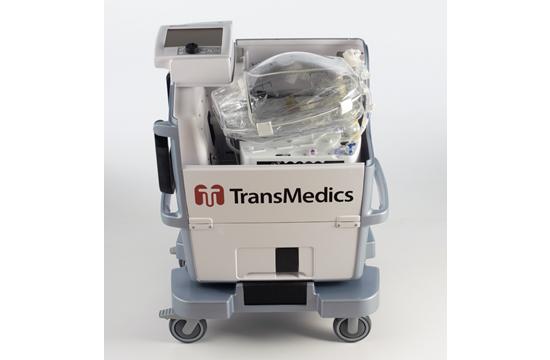 First there was the “heart in a box,” a revolutionary experimental technology that allows donor hearts to be delivered to transplant recipients warm and beating rather than frozen in an ice cooler.

Now that same technology is being used to deliver “breathing lungs.”

The lung transplant team at Ronald Reagan UCLA Medical successfully performed the nation’s first “breathing lung” transplant in mid-November. The patient, a 57-year-old who suffered from pulmonary fibrosis — a disease in which the air sacs of the lungs are gradually replaced by scar tissue — received two new lungs and is recuperating from the seven-hour surgery.

The groundbreaking transplant involved an experimental organ-preservation device known as the Organ Care System (OCS), which keeps donor lungs functioning and “breathing” in a near-physiologic state outside the body during transport. The current standard involves transporting donor lungs in a non-functioning, non-breathing state inside an icebox.

With the OCS, the lungs are removed from a donor’s body and are placed in a high-tech OCS box, where they are immediately revived to a warm, breathing state and perfused with oxygen and a special solution supplemented with packed red-blood cells. The device also features monitors that display how the lungs are functioning during transport.

“Organs were never meant to be frozen on ice,” said Dr. Abbas Ardehali, a professor of cardiothoracic surgery and director of the heart and lung transplantation program at Ronald Reagan UCLA Medical Center. “Lungs are very sensitive and can easily be damaged during the donation process. The cold storage method does not allow for reconditioning of the lungs before transplantation, but this promising ‘breathing lung’ technology enables us to potentially improve the function of the donor lungs before they are placed in the recipient.”

UCLA is currently leading the U.S. arm of the international, multicenter phase 2 clinical INSPIRE study of the OCS, developed by medical device company TransMedics; Ardehali is the principal investigator for UCLA. The purpose of the trial is to compare donor lungs transported using the OCS technology with the standard icebox method. The INSPIRE trial is also underway at lung transplant centers in Europe, Australia and Canada and will enroll a total of 264 randomized patients.

According to Ardehali, in addition to potentially improving donor-lung function, the technology could help transplant teams better assess donor lungs, since the organs can be tested in the device, over a longer period of time.

In addition, it could help expand the donor pool by allowing donor lungs to be safely transported across longer distances.

“For patients with end-stage lung disease, lung transplantation can dramatically improve the patient’s symptoms and offer relief from severe shortness of breath,” said Dr. David Ross, professor of medicine and medical director of UCLA’s lung and heart-lung transplantation program and UCLA’s pulmonary arterial hypertension and thromboendarterectomy program. “The ‘breathing lung’ technology could potentially make the transplantation process even better and improve the outcomes for patients suffering from lung disease.”

The “breathing lung” device follows on the heels of TransMedics’ “heart in a box” technology, which delivers donor hearts in a similar manner. The multi-center national study of the heart technology, also led by UCLA, is ongoing.

Results of a preliminary OCS lung study conducted in Europe were published in the Oct. 10 edition of the journal Lancet. The findings showed good lung transplantation outcomes following preservation using the OCS system, according to the Lancet study.

UCLA’s lung and heart-lung transplant program is the largest lung transplantation program on the West Coast and leads the nation in patient outcomes. The program pioneers novel technologies in lung preservation, recipient immune monitoring and immunosuppression and is responsible for significant advances in transplantation for extremely ill and high-risk transplant candidates.