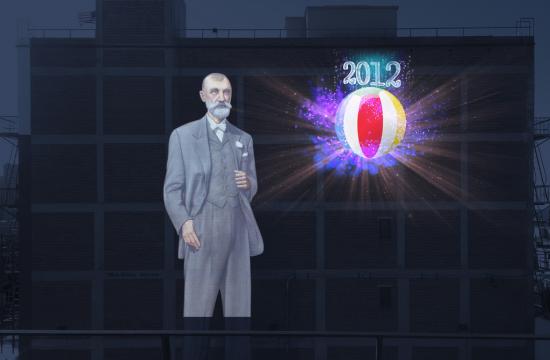 It comes as little surprise Silicon Beach — or Venice Beach, as it is more commonly known — will be hosting a high-tech ball drop of its own this New Year’s Eve.

Unlike Times Square, however, Venice will be dropping a giant 3-D beach ball at 11:59 p.m. PST at the historic mural of Venice Founder Abbot Kinney on N. Venice Blvd. paying homage to the beach ball that was invented by Jonathon DeLonge in Venice, CA in 1938.

The Inaugural Venice Beach Ball Drop, as it is being dubbed, is part of a larger interactive experience that starts at 9 p.m. PST and will see a massive video projected social media wall with tweets and Instagram photos featuring people’s 2013 New Year’s resolutions in real-time.

Event organizers are inviting the public from around the world to participate in the ball drop by sharing their New Year’s resolutions for the coming year.

Organizers will be posting a video of the social media wall on the James’ Beach Facebook Page for participants unable to attend.

“We are encouraging everyone to join in on the fun by posting a tweet or creative Instagram photo using hashtag #JamesBeach with their New Year’s resolutions by 11:30 p.m. PST on December 31,” said Daniel Samakow, co-owner of James’ Beach.

The event is open to the public, although a premium viewing area with full bar and heaters is available to anyone who purchases a prix fixe dinner at area restaurants James’ Beach and Canal Club or V.I.P. wristband on New Year’s Eve.

Dinner reservations can be made online at http://www.jamesbeach.com/NYE or http://www.canalclubvenice.com/NYE or by calling 310.823.5396.