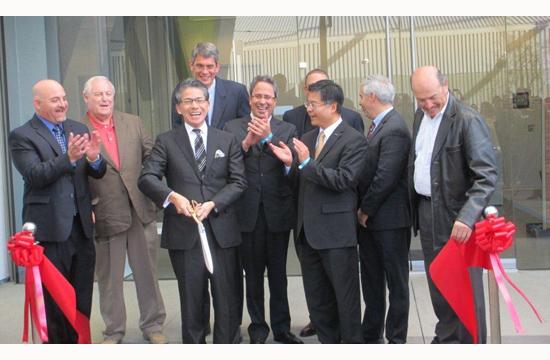 A ribbon cutting ceremony was held Thursday for a new research and development facility at 1800 Stewart Street in Santa Monica.

The company’s current 250 employees and contractors will move to the new 160,000 square foot facility over the next few months.

At capacity, the buildings will hold just over 300 employees. The buildings and site emphasize sustainability and the complex is designed to achieve LEED Silver certification.

Sef Kurstjens, M.D., Ph.D. Agensys President & CEO, said the company was thrilled to be moving to the new state-of-the-art building.

“Our move to an integrated, environmentally friendly facility within the same neighborhood in Santa Monica demonstrates our commitment to employees and to their needs in the workplace, as well as to the local community,” Kurstjens said.

A public rotating sculpture exhibit will be displayed throughout the small park and pedestrian path that connects the facility to Bergamot station.

The first set of sculptures were commissioned from artist Brad Howe and are inspired by cancer fighting antibodies while others are inspired by a range of related scientific processes.

Howe has exhibited in more than 16 countries worldwide, and his works have been placed in collections in 32 countries.