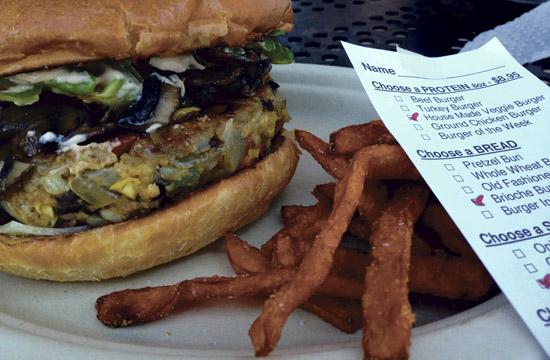 What don’t I love about Hole In The Wall Burger Joint? When everyone (including the burgers) genuinely smile, the ranch is house-made (and the best I’ve ever had), the chocolate chip cookies could quite possibly steal the show, and the owners Bill and Susan are there because they love it (Bill: “I just want her to be happy,” which is heart-rakingly sweet considering they’re actually divorced) – there is no other burger joint to which I’d rather shell out a few bucks.

The thing is, you’ve seen HITWBJ before. Prior to re-opening on Colorado Blvd, HITWBJ used to be a well-known secret as literally a hole-in-the-wall on Santa Monica Blvd in a tiny strip mall. So rest well that the food, passion, and following is tried and true. Here’s how it works:

1. Enter and pick up an ordering form.

5. Sides: Sweet potato and regular, side of the week.

7. Drop it off at the counter. Pick up a chocolate chip cookie for dessert (get two, you’ll want more later), pay, and wait for your order to be handed to you wrapped in paper, in a paper bag. Pick up a few containers of the best ranch dressing I’ve ever had and the homemade ketchup, and you’re good to go.

To test it all out, we sampled the following:

Some items you won’t find on the menu, and that’s how you know you’re eating from a chef who simply loves food, loves cooking, and really enjoys trying things out.

The specials this week were a chorizo burger and potato chips, up soon will be mac-and-cheese, various milkshakes with house-made ice cream, and gluten free buns.

So, how was everything?

1. Beef Burger: No anti-biotics, no added hormones, all fresh ingredients plus that heavenly ranch sauce. Delicious, and just as Bill said: somewhere between In-n-Out and Father’s office (as in, the price trends toward In-n-Out and the taste/quality is much more like Father’s office).

2. Veggie Burger: As someone who has never ever ordered a veggie burger, I’ve finally found one that I would. Black beans, brown rice, peppers, corn, onion, panko, and spices – you can actually discern the patty-made-of-veggies, and it’s hearty, tasty, and a perfect meatless meal.

Just as I was finishing off the last of the cookies and joking how my next step would be much more of a roll, Susan introduced herself (I had been talking to Bill for the entire visit). Beaming, busy, and with eyes as bright as summer, she shared some renovations plans with Bill, who then asked for my sake if she remembered the first meal he ever made for her – laughing, she rubbed her stomach and rested her hand on her heart.

“Of course I do” as she went on for a minute about some salmon-noodle Asian fusion dish with butter and miso, I looked over at Bill whose expression was as content as ever. And just as something like a burger joint between a Starbucks, a dry cleaner, a smoothie shop, and a Japanese restaurant just fits, so does this version of their relationship.

A welcomed addition to the block, I’m happy to claim that it’s in my neighborhood, and that I’ll be there often (as will everyone else).

Tip: It is cash-only, but there is an ATM inside.

Hole In The Wall Burger Joint