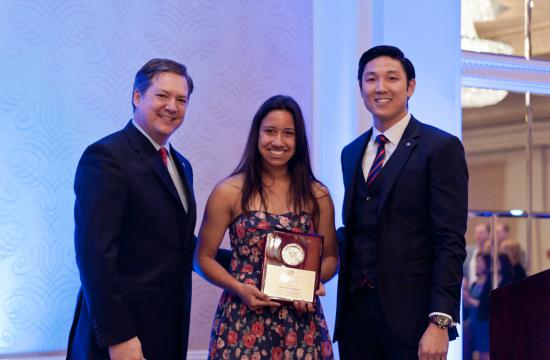 The Boys & Girls Clubs of Santa Monica (SMBGC) named Gretchen Galanis as its 2012 Youth of the Year (YOY) in front of more than 320 guests at the 45th Annual Youth of the Year Awards Celebration & Banquet on Saturday.

The event took place at the Fairmont Miramar Hotel.

The 17-year-old Club member was selected among four extraordinary local youth in recognition of her outstanding contribution of service to the Club, her community, and her exceptional leadership among her peers.

As the 2012 Youth of the Year, Gretchen will serve as the Boys & Girls Clubs of Santa Monica’s youth spokesperson in the community and will move on to the county, state, regional and national competitions, each of which includes scholarships for post-secondary education.

Gretchen will compete in March for the title of YOY for L.A. County — and potentially beyond — and will be eligible to receive scholarships along the way.

Gretchen is motivated by the need to pave a smoother path for young people like herself, who grew up in strict military homes, with minimal access to emotional support which made it difficult to deal with the obstacles she faced.

Gretchen overcame a number of challenges — including low self-esteem and a lack of academic focus to name a few — in large part because of the support she found in her Club mentors and peers.

Gretchen’s involvement in her community, school, and the Club proved to be the most significant step in helping her overcome her obstacles and evolve into the independent and strong young woman she is today.

At the Club, Gretchen found mentors, friends, and ultimately – a family she could rely on. She used community service as an outlet for dealing with stress, because it helped her forget the struggles she was dealing with and refocus her energy on bettering the lives of others.

Gretchen took advantage of any and all service opportunities which the Club offered to her. In the summer of 2012, she traveled to Liverpool, England where she worked with Habitat for Humanity and helped to build homes for low-income families.

Gretchen’s capacity to give back is remarkable – even with her first real paycheck she received after she began working at the Club, she elected to donate half of it back to charity.

Gretchen’s service went beyond the boundaries of opportunities at the Club; she found herself starting food drives and backpack drives at school to help homeless youth get on a better path.

Soon enough, she was elected as Vice President in her school’s Associated Student Body and continued planning drives and school events which served the students and the community.

Gretchen, however, is most proud of the diversification of her school’s student population which she sought to change after recognizing the demographics of her community were not represented appropriately in school; she did all of this while maintaining a 3.8 cumulative GPA.

Gretchen is not a person that sits idly by when there is a chance for potential change, especially if that change can benefit the people that she serves. As a citizen of this country and the world, she figures that she has an obligation to serve everyone.

If Gretchen wins at the County competition, she will receive a scholarship and can move on to State, regional and national Youth of the Year competitions.

Five regional winners will advance to Washington, D.C., to compete for the title of the Boys & Girls Clubs of America’s National YOY. The national winner will receive an additional scholarship of up to $50,000 and will meet the President of the United States in an Oval Office ceremony.

Aaron Young, President and CEO of SMBGC, said the annual YOY banquet is truly a very special occasion for us to recognize and celebrate the accomplishments of each of our nominees, their commitment to serve the community and their ability to overcome difficult circumstances.

“We congratulate Gretchen Galanis – and her fellow nominees – on their achievements,” Young said. “Gretchen is a shining example of a young person who has made outstanding contributions to the Club and her community and has overcome extremely challenging obstacles to become the leader she is today. She is a living proof that great futures start here, at the Boys & Girls Clubs of Santa Monica.”

The Santa Monica Chief of Police and Club Board Member Jacqueline Seabrooks hosted the celebratory event.

Many guest speakers such as Stan Choo of the Kiwanis Club offered words of encouragement and inspiration.

Sponsors including the Kiwanis Club of Santa Monica, the Pacific Youth Foundation, White & Company Insurance Inc., Bank of America, and Frank & Gwen Schwengel, provided scholarships for many of the youth recognized at the banquet.