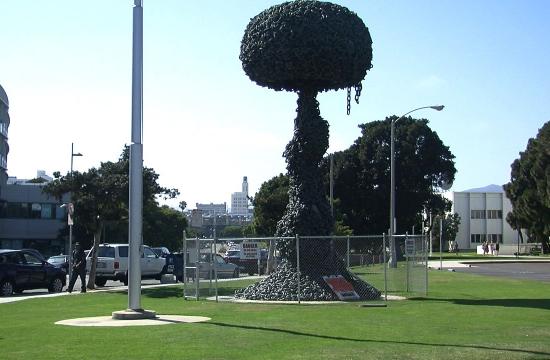 Santa Monica’s most iconic piece of public art was given a reprieve Tuesday night, as Council members granted supporters of Paul Conrad’s “Chain Reaction” an additional year to raise enough money to potentially save the nuclear mushroom peace sculpture.

The 6-1 vote means the Conrad family and community members will have until Feb. 1, 2014, to raise almost as much as a half million dollars in order to prevent the “Chain Reaction” sculpture from potentially being taken down.

Also, Council members voted to provide fundraising supporters with a letter of support as well as a matching dollar-for-dollar commitment from the Cultural Trust Fund “if community efforts successfully raise the amount needed to rebuild the sculpture and a contract to proceed with the work was to move forward.”

An expenditure of $20,000 was also approved to temporarily patch and secure the sculpture.

“I’ve heard the argument that any money spent on ‘Chain Reaction’ takes food away from the hungry or kid’s education,” Dave Conrad told Council members. “By that thinking there never would have been any money spent on public art.”

Abdo, who was mayor when the council first approved erecting “Chain Reaction” in 1990, also urged this current council to give the sculpture’s supporters more time to raise money.

Rubin, who wore a T-shirt bearing an image of the “Chain Reaction” sculpture, told Council members both the community and Conrad family “have earned more time and more City support” to preserve the sculpture.

He also presented to Council members a petition of about 300 signatures of people who supported preserving “Chain Reaction.”

“Everyone has the right to their own aesthetic,” Rubin said. “Some people hate it … but clearly it’s an important artwork. The City does have a responsibility to maintain this.”

Another former mayor – Michael Feinstein – wrote to council members that should they decide to remove “Chain Reaction,” it would only be a matter of time before City Halls yearns for a new piece of public art – which might be as costly to the City as preserving Conrad’s nuclear cloud sculpture.

“The message of peace – and of opposition to war and nuclear weapons, is timeless, and cannot be boxed, documented and put in a museum and/or on the web some where,” Feinstein stated. “If Chain Reaction was gone, wouldn’t we end up thinking about some new public art component some day as that part of the Civic Center fills in, that would also cost [money]. Sometimes the greatest long-term gift is simply keeping someone (or something) alive to live another day.”

In another letter sent to Council members, art historian Carol Wells said the “Chain Reaction” is more than just a 26-foot structure in Santa Monica.

The Chain Reaction is a sculpture gifted to Santa Monica in 1990 by Pulitzer Prize-winning political cartoonist Paul Conrad. It is Santa Monica’s first-ever public artwork to be granted landmark status. Paul Conrad passed away in September 2010 at the age of 86.

“The work was funded by a private donation to the Santa Monica Arts Foundation of $250,000.” City staff stated. “It is important to note that in terms of Paul Conrad’s intent for the work, to the extent that it can be understood from the contract that he signed with the City, he specifically gave the City permission to move or to ‘abandon, dismantle or destroy the Work’.”

Chain Reaction had become an issue at City Hall because of long-term safety concerns associated with the work. According to City staff, the dome of the sculpture needs to be removed and either rebuilt or replaced.

City Hall estimated the cost of repair Chain Reaction would be about $227,000. A full rebuild of the sculpture could exceed $423,000, City staff stated.

“To date less than $10,000 in private funding has been secured,” City staff said. Dave Conrad added the funds rose were part of a grassroots movement with individuals contributing “to a cause they believed in.”

Though the sculpture was officially deaccessioned and therefore removed from the Santa Monica’s public art collection, City Hall is still responsible for certain maintenance costs.