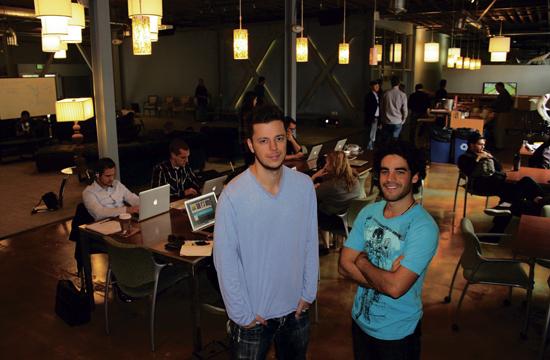 When an entrepreneur begins a business venture, Cross Campus co-founder Dan Dato describes the journey as taking a big leap where it’s sometimes hard to know whether the person will make it to the other side.

With this philosophy, Dato set out with his co-founders Ronen Olshansky and Michael Kianmahd to create a state of the art 11,000 square foot shared work space at 820 Broadway in the heart of Santa Monica to bring like-minded entrepreneurs together to help give them every chance to succeed.

Since Cross Campus opened in October, there has been a steady increase of individuals and companies moving into the space to make their mark in the business world.

Cross Campus is the product of Dato and Olshansky who merged their two companies – Dato owned upStart.LA while Olshansky owned Study Hall.

Dato has been founding and supporting startups since he moved to Los Angeles from New Jersey 20 years ago.

Throughout the past two decades, he has formally and informally been involved in advising and mentoring entrepreneurs and their startups.

He said he had seen first-hand how the entrepreneurial culture had changed, but not necessarily improved, saying there had been a lack of support for helping entrepreneurs to succeed.

“Two and a half years ago when I started upStart.LA there was Silicon Beach, but there wasn’t this movement that there is now,” he said. “I was not alone in sharing the frustration or the commitment in making it better.”

Olshansky was another person frustrated with the difficulties that entrepreneurs faced when starting their own ventures.

Olshansky lived in Moscow from 2008-2011, but returned to Los Angeles to start a family with his wife.

When Olshansky moved back, he said Los Angeles was very different from when he left: what he saw was a massive movement beginning in the startup community.

Dato said he crossed paths with Olshansky in October 2010 at a business event and after months of discussing their companies, they decided to merge to form Cross Campus.

“The point where we’re at now is that we’re like an old couple,” Dato said. “We often tag team as we do things.”

Now the pair is continuing to build on their past efforts to foster an environment where entrepreneurs can succeed.

“I think we are next generation,” Dato said. “I think this is unlike any other office environment, but that doesn’t mean that we just came up with everything.”

The pair decided to create an open collaborative environment. As part of their research into creating the best shared space possible, they looked back to the first European offices in the 1500s in Florence, Italy, and studied the evolution of how the work environment changed in Western Europe in the 1800s, to the changes seen in 1900s industrial America.

“We saw an overall progression from industrial to information, and from information being physical to information being digital, and the impact those things have requires less and less need for private and personal space,” Dato said. “We were inspired by people like Jay Chiat and what he did at Chiat/Day, which is an amazing building in Venice now called the Binocular Building that Google is in. Twenty years ago when he built it in the 1990s it was a massive failure because he was a man 20 years ahead in time in the environment he created.”

With this in mind, Dato and Olshansky built a space that enables and encourages certain behaviors and a culture that is open, where there is collaboration, and where people can have what they call “creative collisions.”

“You don’t collide when you are in your own office, you collide when you are in an open environment,” Dato said. “As folks who have gone through numerous successes and our share of failures in the startup environment, we took the way people were working in offices and blended into what was happening in the entrepreneurial ecosystem and what has happened in our entrepreneurial experiences and seeing the support that you need functionally, the support you need emotionally, and the environment you need to stay creative, to stay visionary, to build innovative solutions, and to solve the problems other folks don’t see. Everything we did here was to build this inspirational, motivational, and collaborative environment.”

The space has different zones to meet different people’s personalities and moods.

The pair realized entrepreneurs often work up to 16 hours a day when creating a startup, so they created spaces for people to hang out away from their computer screens.

However, Dato said most of the areas are nothing but “intense kick-ass productivity” work areas.

“When you go into the Founder Room you see that it’s sound proof. It’s a ‘get stuff done’ room,” Dato said. “Our members call it the sanctuary because we can have something like a Chamber of Commerce event where there are 100 people in the main room, but there are still people working in the Founder Room and they don’t hear what’s going on out there.”

One of the most experienced entrepreneurs who has made Cross Campus his office space is David Vronay, a former employee of Apple and Microsoft.

Vronay is a leading talent in UX/UI and front end development who brings a talent and experience level to Cross Campus.

His company is called Eweware, which he co-founded with former Netflix data architect Ruben Kleinman, and their current project is called Blahgua.

“We saw a lot content sharing networks kind of falling into two categories,” Vronay said. “On one side was the sort of identifiable social network types like Facebook, Twitter, Google and then you had the anonymous public networks like Reddit. There are advantages and disadvantages to each, but we thought there’s some space between to have an anonymous network that supported verification.”

He said Blahgua set out to validate users without identifying them to create a spectator product.

“So I can say ‘I don’t know who you are, but I know that you are a Microsoft employee, I know you work in Seattle, and I know this and that about you,’ which is basically whatever people choose to reveal about themselves but within that cohort you are anonymous,” he said. “It’s really good for gossip, rumors, and the kind of local group stuff where there is very open communication. The problem that a lot of these systems have had in the past is if you have anonymity you have a lot of bad behavior because there’s no reputation, there’s no validation, and kind of the special sauce if you will that we have is we have figured out a way that we can do reputation and validation without using identity. We’re verified, but not identified.”

Vronay said he expected to have a public beta version to be available Feb. 15.

He said Cross Campus had been beneficial for his startup after he moved to Santa Monica from Seattle last year.

“For any type of this kind of startup, you need to be in touch with a lot of other people in the community,” he said. “I had tried co-workspaces in the past. When you want to focus, you really need a place that has your stuff and your computers.”

On the other end of the spectrum is Nathan Doctor and Jake Hoffner, who are behind the startup CodeWars, a internet society for coders to test their skills against each other and collaborate on cutting-edge computer technology.

Doctor said the site focuses on empowering ‘hackers’ – innovators who use technology and software to change the world in fundamental ways.

“CodeWars is a competition platform for hackers, where they compete with each other and through that process sharpen their skills and earn respect within the community,” Doctor said.

CodeWars recently launched its private beta at www.CodeWars.io, with a few prominent Los Angeles investors behind them.

“We have an initiation website that allows hackers to take code katas, small programming challenges,” he said. “These let them prove their skills and show they know how to code to gain entrance into the community. Once they go through that initiation process, they get invited into the dojo if they make the cut.”

Once they are invited into the community, Doctor said they can compete on building software and collaborate on opensource projects with other talented coders.

Doctor said his favorite element of Cross Campus was the sense of community.

“I think that’s something that we’re seeing more and more, not only startups, but in the tech world, community is such an important thing,” he said. “A lot of startups, especially at our stage, are not big enough that you need your own office. Alternatively you don’t really want to work from home. It works to a degree, but this kind space brings people together. The best part about it is that not everyone is in the same industry. It’s not all just developers, there’s a ton of them here, but on top of it there are people from all different segments that help to create even more out of it. I believe where true innovation comes is along the edges of blending between different industries.”