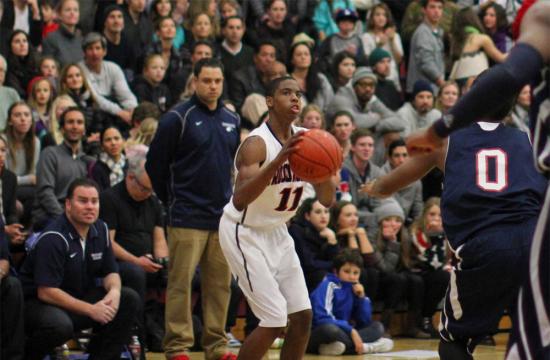 From the moment both teams entered the auditorium it was clear that Brentwood(15-1) had a size advantage over Crossroads(8-6); an advantage they would use to the fullest by winning the contest 75-40 at the Crossroads Extravaganza event at home Friday night.

Crossroads Basketball Head Coach Anthony Davis was at a loss after the game.

“I felt we could have played the match-ups better,” said Davis. “I’m very surprised. Brentwood’s a good team.”

Crossroads lost the tip-off and was forced to foul early to stop the down low offensive attack led by Leland King.

Crossroads turned the ball over on their first possession which would prove to be an indicator for how the rest of the game played out.

The Roadrunners struggled offensively and the Eagles held Crossroads to seven points in the first quarter and nine in the second.

Crossroads was never able to get in rhythm offensively and every successful shot made by the Roadrunners always had an answer at the other end by the Eagles.

The loss on Friday snapped a two game winning streak for the Roadrunners who, despite having an off-shooting night, turned the ball over ten times and gave up 17 offensive rebounds.

Myles Stevens was one of the few players in double figures for Crossroads. Stevens started the third quarter with a nice three-pointer and was able to draw fouls and get to the line in the second half.

Davis also thought that the Roadrunners had problems rebounding.

“Rebounding is our weakest tendency as a team,” said Davis. “Too many turnovers, and too many second chance opportunities. We need to limit our turnovers late in the game to give us a chance.”

Crossroads had five turnovers in the fourth quarter alone and the three guard set just didn’t have the presence in the paint to stop Brentwood.

Crossroads won its following game away against the California Academy of Math and Sciences on Saturday 79-52.

Next game for Crossroads is at home against Milkin Tuesday, Jan. 15 at 7 p.m.