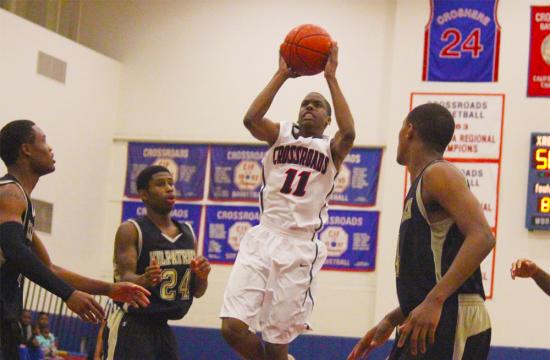 Crossroads (3-1) beat Kilpatrick (0-6) 65-51 with the Roadrunners identical guards Jason and Brett Ball spreading the ball around the court, making shots, and spearheading the Roadrunner defense in the third and fourth quarters to overpower the Mustangs at home Monday night.

Crossroads Head Coach Anthony Davis felt like the Roadrunners were improving and that Crossroads stepped up their game against Kilpatrick.

“Our guys came out very aggressive today,” said Davis. “I felt like our kids did a pretty good job coming in and adding that into the game.”

The game was tied 25-25 with a minute left to play in the first half but Crossroads guard Alexander Miles, who scored ten points in the first half, was fouled and sent to the line where he hit both his free throw shots to push the Roadrunners up 27-25.

“Alexander is a hard-nosed on-the-ball defender and he has put that spark on our team,” said Davis.

Crossroads Brandon Tillis converted a free throw shot a few moments later before hitting a long jumper as the half expired to give the Roadrunners a six point lead at 31-25.

In the second half, Roadrunners forward Miles Stevens came alive in the third quarter and scored nine points in an effort that opened up the offensive driving lanes against Kilpatrick by forcing the Mustangs to cover him on the outside.

It was then that the Ball brothers combined their talents to exploit the numerous openings inside Kilpatrick’s defense by launching an aggressive dual-pronged attack on offense while menacing the Mustangs with numerous steals on defense.

“It’s pretty good having the Ball brothers on the team,” said Davis. “They are both energetic and play off of each other so well. When I need a stop or something on defense, they are the ones who are going to be getting it for me as well as making the big shots.”

The Ball brothers combined to score 15 points against the Mustangs.

Next game for Crossroads is home against Brentwood Friday night at 7 p.m.