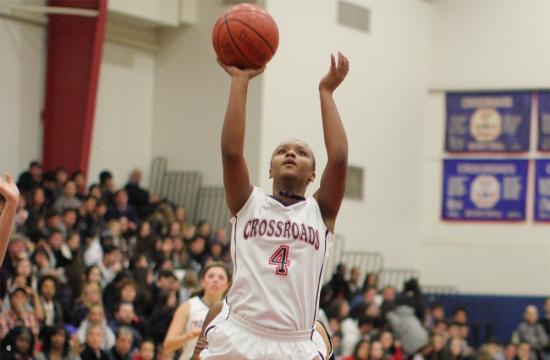 Crossroads (10-3) Lady Roadrunners Basketball won in the final minute over Brentwood (9-10) 51-50 during the Crossroads Extravaganza night that boasted the sports play of all the Winter Sports featured at Crossroads versus rival Brentwood in front of thousands of fans who flocked to support the two crosstown rival sports programs.

Crossroads forward Damonique Ballou was excited about the Crossroads Extravaganza and the win versus Brentwood in front of the massive crowd that came to support their teams.

“Brentwood is our rival,” said Ballou. “Tonight, our defense really helped a lot. We just sucked it up and did what we had to do and out hustle Brentwood. We went out trying to create turnovers and take it all, and that’s what we did.”

The Roadrunners went on a run in the third quarter with Ballou leading the charge and scoring a bucket on a baseline jumper over Sammy Schlessel of Brentwood to extend the lead of the Roadrunners by three at 32-29.

Guard Kayla Mitchell came up with the steal on Brentwood’s next position and found Ballou open under the basket for another bucket before Mitchell went on a six point run to put Crossroads up 40-33.

The run proved costly for the Eagles during their comeback where Brentwood was able to take the lead over Crossroads for a brief moment by one point at 50-49 with 1:07 left to play.

But Mitchell and the Roadrunners would have none of that and blocked the Eagles on their next possession.

It was then that Mitchell scrambled back across the court before she hit an off balance jumper near the top of the key over Brentwood’s Raven Morgan to give Crossroads the lead at 51-50 with 36.4 seconds to play on a swish that sent the packed Crossroads stands into a frenzy.

Crossroads ran out the clock and secured the win.

Mitchell led the Roadrunners in scoring with 18 points on the night.

Next game for the Roadrunners is away against the California Academy of Math and Sciences Monday at 4 p.m.