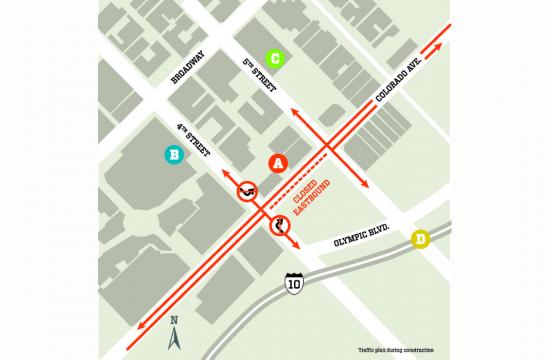 Traffic in downtown Santa Monica is about to get a little worse with the upcoming permanent closure of eastbound Colorado Avenue between 4th Street and 5th Street.

The closure is schedule to begin at 8 a.m. on Monday, Feb. 18 as part of construction of the Expo Line station at Colorado/4th.

Motorists are advised to take 4th Street to Olympic Boulevard or Broadway as an alternate.

Westbound Colorado Avenue will be reduced to one through lane and one left turn lane between 4th Street and 5th Street.

Electronic message boards and directional signage will be used to direct traffic around the construction zone.

Here are the alternate advisories:

— Northbound traffic turning right on to Colorado Avenue will be directed to Broadway or further north as an alternate.

— Southbound traffic turning left on to Colorado Avenue will be directed to Olympic Boulevard or further south as an alternate.

— Northbound and southbound 5th Street will remain open to through traffic, allowing both right and left turns at Colorado Avenue.

— All traffic using the 4th/5th Street freeway exit towards Colorado Avenue will be directed to exit at Lincoln Boulevard or 5th Street.