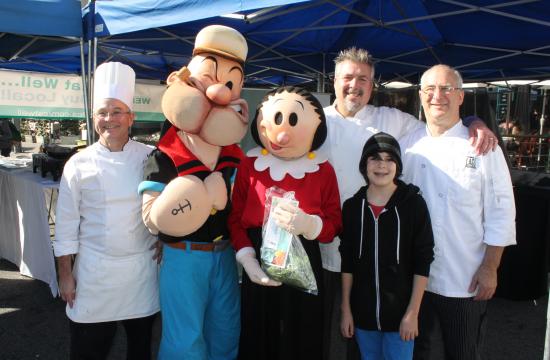 “We took some of our mainstay menu items and twisted them a little bit,” Roberts said. “We took out some of the fatty ingredients and gave a little bit of a twist on the cooking techniques. You will see a little more roasting and grilling instead of sautéing, but keeping our same high quality ingredients.”

Roberts said he didn’t have to make many changes to the dishes as most already used fresh ingredients.

The Lobster’s executive chef Collin Crannel said he was thrilled to be part of Eat Well Week.

“We have a great number of healthy dishes,” Crannel said. “We’re doing a seared Albacore that’s thai inspired with coconut lime sauce and cucumber, fresh oysters on the half shell, a beautiful winter Persimmon salad with raisins, nuts, Manchego cheese, and baby red and green romaine.”

As for entrees, Crannel said he would serve up Hangar Steak Kebabs with chive pesto and Romanesco, Salmon with quinoa pilaf, squash, almonds, and spinach with a tzatziki foam sauce, and a Vegetable pasta with ingredients sourced from the Farmers Market.

“It’s great to start off Eat Well Week in winter time when there are great vegetables available,” he said.

“We’re very spot on the Mediterranean diet, which is in general considered the healthiest diet that there is,” Sheehy said. “We make all of our pastas fresh in house so we are aware of preservatives and additives.”

As part of Eat Well Week, Sheehy said a four-course menu would feature items such as a spinach salad, ravioli stuffed with spinach with a spinach garlic sauce, a Steelhead Salmon, and Venison (one of the leanest red meats).

“In addition our menus will be noted with a little vegetarian sign, which will mark all of our local farmers market sourced dishes so people can come in, eat healthy, and try get off those holiday pounds.”