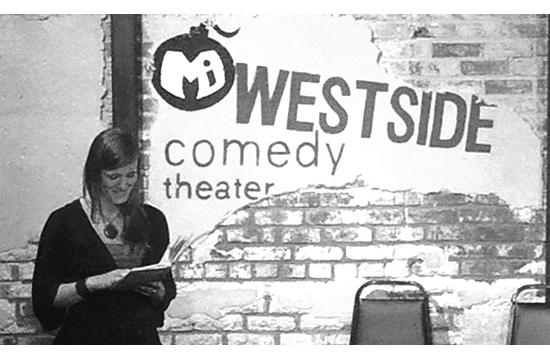 After a popular debut in November, “Improv Diary…(Uh)” returns to Mi’s Westside Comedy Theater in Santa Monica with two final shows on Jan. 2 and 9.

At each show, three different people read from their actual diaries and a team of five improvisers creates brand new improvised scenes on the spot based on the diary entries.

Feazell said the show was loosely based on the improv format known as The Harold; in this form, she said improvisers create scenes based on a three-part monologue.

“This show also borrows from an idea made popular by Mortified, which has a live show entirely based on people reading diary entries,” Feazell said. “Drawing on these ideas, the combination is what makes ‘Improv Diary…(Uh)’ unique: ordinary people reading their most secret truths about themselves with enough perspective to realize how ridiculous they were/are, followed by improvised scenes inspired by characters and themes in the diary readings. We get to watch a sort of ‘alternate reality’ of the reader’s past life – based on a very specific incident – made up on the spot. It’s really honest and fun to see.”

Feazell started taking improv comedy classes at Westside Comedy Theater in May and one of her classmates told her she was one the most honest people she had ever met.

She said she was brave enough to read her one of her own diary entries and was encouraged to pitch the idea of doing improv based on diary entries.

“Throughout my improv classes, I began to learn that improv comedy is, at its core, about having an honest emotional reaction – the same type of impulsive feelings and ridiculous thoughts you might only share in a diary are the same emotions and feelings that make improv comedy hilarious,” she said. “Things people say on stage, cutting right to how they feel about another person, are hilarious because we don’t do that in real life. We keep it to ourselves and write it in our diaries.”

Feazell said each show was about 45 minutes and was a whole lot of fun.

“We all have a little bit of our ridiculous, younger, insecure selves still lingering in us,” she said. “Reflecting on that and laughing at yourself is a really good way to start the New Year. And if you just spent the holidays holding back from telling your family how you really feel about them, this is a great way to laugh about what could happen if you did and maybe make you glad you didn’t.”

The theater is located at 1323-A 3rd Street Promenade (in the alley between 3rd and 4th at the back of Parking Structure 3).

Tickets cost $5 at the door or online at www.westsidecomedy.com.