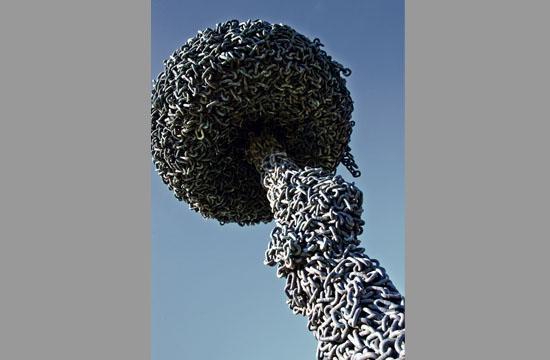 A new year means new hope. For supporters of the Chain Reaction sculpture near the Santa Monica Civic Auditorium, that hope is to have both the Arts Commission and City Council vote later this month to restore the public art work with art funds.

Arts Commissioners will consider the future of the Chain Reaction, a large sculpture gifted to Santa Monica more than 20 years ago by political cartoonist Paul Conrad, at its Jan. 17 meeting. Council members are scheduled to take up consideration of the sculpture the following week.

The future of Chain Reaction had come to a head after City Hall completed testing of the art structure and its designation as a landmark. It is Santa Monica’s first-ever public artwork to be granted landmark status.

Chain Reaction had become an issue at City Hall because of long-term safety concerns associated with the work. According to City staff, the dome of the sculpture needs to be removed and either rebuilt or replaced.

City Hall estimated the cost of repair Chain Reaction would be about $227,000. A full rebuild of the sculpture could exceed $423,000, City staff stated.

Though the sculpture was officially deaccessioned and therefore removed from the Santa Monica’s public art collection, City Hall is still responsible for certain maintenance costs.

“The City’s landmarks ordinance places certain maintenance and repair obligations on the City, as owner of the sculpture,” City staff said. “Further, any alteration, restoration, construction, removal, relocation or demolition of or to the sculpture or its associated landmark parcel will require review and/or approval of the Landmarks Commission.”

Local activist Jerry Rubin believes Chain Reaction is a valuable asset to the City and hopes Arts Commissioners and Council members find a way to fund its restoration.

“Santa Monica has long been known as an art friendly city. It’s an iconic monumental structure,” Rubin told The Mirror. “It’s not acceptable that our first landmark is removed.”

Rubin contributed $100 to the campaign to help raise funds to help pay for the structure’s restoration. His wife also donated $100.

The family of Conrad, who passed away in 2010, sold one of his artworks dedicated to Martin Luther King, Jr., for $4,500 to help contribute to the fund raising efforts.

In all, City staff stated $8,590 has been raised so far, well short of the estimated $227,000 required to repair Chain Reaction.

Part of the cost of repair includes the building of a landscape barrier – or “peace garden” – around the sculpture. City staff said the barrier would cost $80,000, an expense the City Manager’s office stated it would help find a way to fund if supporters can raise enough money to pay for the repairs.

“The City has done considerable local outreach to make potential donors aware of the need, including press releases, listings on various websites, and a spot on City TV,” City staff stated. “The community group’s fundraising efforts are ongoing and they have recently enlisted the support of a grant writer to assist them researching and writing grants.”

Still, despite City Hall’s support, raising money has not been fruitful. Accordingly, City staff has stated the deaccession decision was fueled by “the high cost of restoring or rebuilding the work for future generations.”

“To put the potential cost of these repairs in perspective, City Council allocated $100,000 in one-time funds in 2008 to assist with major conservation needs for the City’s collection,” City staff stated. “The funds were used to repair three works: Big Wave, by Tony de Lap, which is also 20 years old; the installation by Michael Davis in the Public Safety Facility; and the work by Mauro Staccioli located at the intersection of Pico Blvd and Ocean Ave. Such an allocation is unlikely to be repeated in the current budget climate.”

The loss of redevelopment funds further impairs City Hall’s ability to help fund the repair or replacement of Chain Reaction.

“With limited arts funds available, the investment required to repair or rebuild the sculpture, likely to total substantially more than the original cost of the sculpture, continues to be disproportionate in regard to overall community cultural funding priorities,” City staff sated. “Staff recommends that the Public Art Committee and the Arts Commission confirm that Chain Reaction is not a priority for the allocation of limited arts funding.”

Chain Reaction will be on the Arts Commission’s agenda at its Jan. 17 meeting, held at Ken Edwards Center. Council members may consider the sculpture’s future as early as Jan. 22.