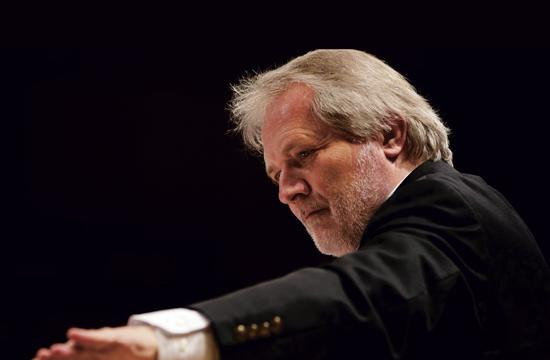 Hungarian conductor and composer Peter Eötvös, best known for acclaimed operas “Angels in America” and “The Three Sisters,” will be the focus of a weeklong concert series to be launched with a U.S. premiere by Jacaranda on Jan. 12 at the First Presbyterian Church of Santa Monica.

Jacaranda is presenting the series in partnership with the Los Angeles Philharmonic, whose concerts will be held at Walt Disney Concert Hall.

Eötvös will make his only conducting appearance during this visit with Jacaranda.

His new work for eight solo singers, eight solo wind players, two percussionists, and amplified accordion is based on texts by the 18th-century poet, philosopher, historian, and playwright Friedrich Schiller, whose poem, “Ode to Joy” is famously featured in Beethoven’s “Ninth Symphony.”

David and Margaret Barry provided support for Jacaranda to co-commission “Schiller: Energiche Schoenheit” with three European music festivals: Aldeburgh, England; Witten, Germany; and Strasbourg, France. The German and French premieres were given by Ensemble Modern with Schola Heidelburg, while the British premiere was given by the London Sinfonietta with the singing group, Exaudi.

The text is drawn from Schiller’s “Letters on the Aesthetic Education of Man.” Attention is paid to the kind of “energetic beauty” that activates and explodes. Schiller likens this kind of beauty to making political changes: “a wheel has to be exchanged for another during its revolutions,” as compared to repairing a run-down watch.

The 68-year-old composer’s remarkable 1992 string quartet, “Korrespondenz,” will be performed for Jacaranda by the Calder Quartet.

Fellow Hungarian György Ligeti (1923-2006), whose music became world famous in the classic film, “2001: A Space Odyssey,” will also be featured. In addition to his 1988 Piano Concerto, considered by the composer to be his “aesthetic credo,” two early works will be performed: the Soviet-banned solo Cello Sonata (1948-53), finally premiered in 1979, and the ingenious “Six Bagatelles for Wind Quintet” (1956), also initially supressed as “dangerous.”

Grammy Award-winning pianist Gloria Cheng will perform Ligeti’s Piano Concerto with the Jacaranda Chamber Ensemble conducted by Scott Dunn, associate conductor of the Philharmonic’s Hollywood Bowl Orchestra. Cellist of the acclaimed Lyris quartet, Timothy Loo, will perform the highly virtuosic solo sonata. Its appeal grew such that in 2005 proficiency in the sonata became a qualification for the Rostropovich Cello Competition in Paris.

In addition to anvils, steel drums and a wooden metronome, as well as a panoply of xylophones, gongs and log-drums, the composer’s elaborate percussion requirements for “Schiller” include newly-created instruments made from a hanging beam, and a large stone with hammer and chisels.

Concert tickets are $40 general admission and $20 for students.