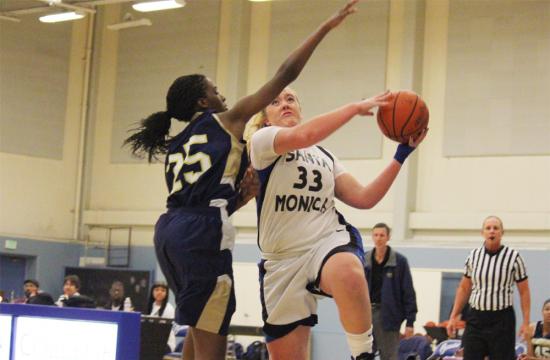 SMC (8-12) women’s basketball lost a league game at home Wednesday night to Western State South division leader Canyons (14-7) by a lopsided score of 103-76 in a game where it was quite apparent from the beginning that the Cougars had the upper hand and that the offense of the Corsairs failed to materialize.

Cougars Basketball Head Coach Greg Herrick thought that the offense of the Cougars did well against the Corsairs.

“Offensively we were on target,” said Herrick. “When you score 100 points that’s kind of defining the point total so we thought the transition game worked pretty good.”

With 6:46 left to play in the first half, the score was already 31-12 and the Corsairs seemed to have little chance of regaining their footing against a superior Cougars team.

Canyons forward Keiona Matthews was unstoppable, kept getting open, and seemed to nail every three-point shot she took. Matthews finished the game with 26 points.

Regardless of the win, Herrick was not satisfied with the Cougars final minutes of play.

“Defensively I wasn’t very happy with the final ten minutes of the second half,” said Herrick. “A lot of times it is hard to get kids to get motivated when you are up that high and by that much.”

Next game for the Corsairs is away against LA Valley College today at 5 p.m.