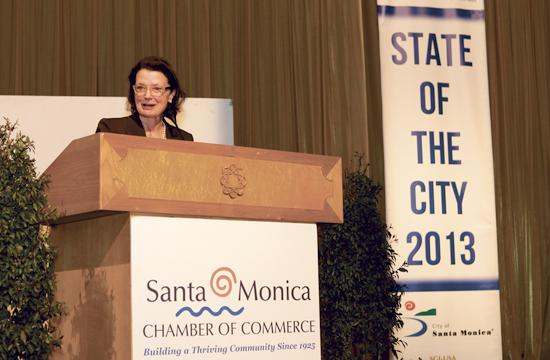 Earlier this week, City Council members talked about saving money for a rainy day. Clearly they were not referring to the wet weather that welcomed the Santa Monica State of the City held Thursday morning at the SGI USA Center. Yet planning for the future was definitely a topic of discussion among the event’s speakers and nearly 300 attendees.

While last year’s State of the City focused on technology, this year’s event, which was planned by the Santa Monica Chamber of Commerce, delved into public transit. With the Expo Light Rail line arriving in Santa Monica potentially as early as 2015, both City and County leaders used the event to celebrate the future without taking an eye off the present.

City Manager Rod Gould told The Mirror that Santa Monica has a lot to look forward to in the coming year as Council members and other civic leaders balance the promise of the future with present realities.

“Santa Monica is a place where this community and City need to make some choices. And we have some terrific choices,” Gould said. “Choices to revitalize the downtown and make it more vibrant and interesting. Choices to make a transit-oriented village at Bergamot Station… (and) at the same time preserve neighborhoods. There is a lot of stimulus coming to Santa Monica.”

Gould also said while the City has choices to make about its future, every effort would be made to preserve Santa Monica’s neighborhoods.

“I don’t want people to worry that Santa Monica will lose its community identity,” Gould said.

He added the City would make a lot of decisions in 2013, such as a new zoning code, development of the Bergamot Area Plan, and the execution of bike and pedestrian plans.

The impending choices are balanced with budget challenges. Capital improvements will be difficult to execute with the loss of redevelopment, for example. Still, Gould said Santa Monica has a better outlook than most other cities in the county.

Santa Monica Chamber of Commerce president and CEO Laurel Rosen said part of reason Santa Monica has a promising future is because of its thriving business community. She pointed out The Chamber represents nearly 850 businesses in Santa Monica employing about 10,000 people, adding the City has a grand total of more than 7000 brick and mortar businesses.

“This City is great because of its business community, their availability, (and) their contribution to the General Fund,” she said. “We’re moving forward as a city and we can do that together.”

Amidst the positive sentiment, O’Connor balanced her perspective with a take on the recent council discussion about the five-year budget outlook.

“There’s always uncertainty. We don’t know what the future is. That’s why we in Santa Monica have in the past and continue to work to have a sustainable baseline budget. We have to keep our eyes on the horizon, we have to be creative, but I’m optimistic,” she said.

That optimism continued during the keynote addresses by two members of the L.A. County Metro Authority, which oversees the Expo Line and all other public rail transit in the Los Angeles area.

Martha Wellborne, Executive Director of Planning for LA Metro, addressed the 300 some attendees about the future of light rail and subways in Los Angeles County. In addition to the Expo Line’s planned arrival in the next two to three years, Wellborne hinted at the Westside extension of thread Purple Line, which will travel along Wilshire Boulevard between downtown Los Angeles and Santa Monica. Metro is also going to conduct a feasibility study looking into building a corridor along Sepulveda connecting the Valley and the Westside to LAX.

She added the Metro system as a whole features 134 miles of rail and has matched San Francisco’s Bay Area Rapid Transit in ridership.

Also addressing the State of the City was Richard Thorpe, CEO of Exposition & Construction Authority.

Thorpe spoke practically of what to expect when the Expo arrives in Santa Monica. For example, travel time from Fourth and Colorado to downtown Los Angeles would take 46 minutes. Metro also projects 27,000 people riding Expo Line each day once complete.

He also added that the Expo Line construction is responsible for nearly 4,000 jobs and more than $100 billion will be spent on local businesses.

“This is much more than just a train from Santa Monica to Los Angeles,” Thorpe said.

Concluding the State of the City were O’Connor and Gould, both of whom spoke of Santa Monica’s outlook.

The Economic Excellence Award was presented to Jonathan Wolf on behalf of the American Film Market for its continued support of the Santa Monica community and Pam O’Connor was honored for her contributions in moving Santa Monica forward.