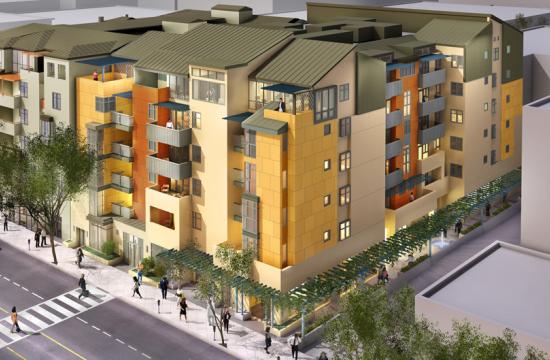 The developer of two adjacent apartment buildings at 1420 and 1430 Fifth Street in downtown Santa Monica announced earlier this week its project is at 30 percent leased.

“Residents will be able to live, work, and play without ever needing to get into their cars,” said Andersen. “This is part of our vision for walkable destination apartments for lease in Santa Monica. Leading this kind of lifestyle will save residents thousands of dollars in car-related expenses and reduce their carbon footprint.”

The building exteriors of the two buildings utilize plaster, resin panels, and painted metal panels and are further distinguished by sloping, metal roofs, which also conceal mechanical equipment, according to KFA principal Barbara Flammang, whose firm has designed more than 8,000 units of multifamily housing..

Another design element of the $22 million project are the powder-coated custom blue tube steel trellises which march along the ground floor and are echoed at the fifth and sixth floor balconies.

Comprising 100 units, with one and two-bedroom floor plans ranging from 525-1395 square feet, the apartments include European-styled cabinetry and stainless steel kitchen appliances and personal security systems.

Full-lot 10-foot wide courtyards, which provide lounging areas for residents along the sides of the buildings, are paved with varying shades of tile accompanied by colorful tiled planters and water features, the architect added.

Parking is provided on three subterranean levels, and in three years, residents will have the option of a Metro station just three blocks from the project.

Rental prices start at $2,695 for one-bedroom units, and $3,795 for two-bedroom apartments, the developer said.