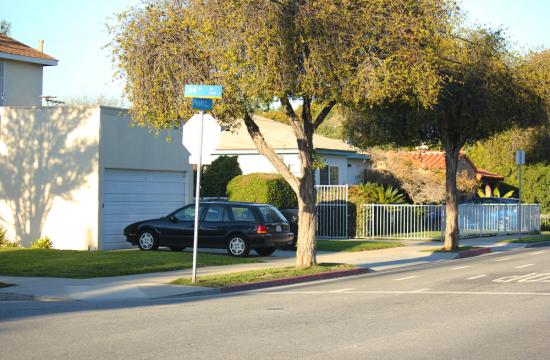 A man with a gun had been reported near the cross streets of Pearl and 34th street in Santa Monica near S. Centinela Blvd at approximately 3:30 p.m. on Thursday afternoon shutting down a section of Pearl St. between 34th and S. Centinela Ave.

Police were at the scene.

As it turned out, this is where a gun had been thrown out of the window of a car after the gun had been pointed at a Vons Employee in the parking lot of a Vons Market on 1311 Wilshire Blvd.

According to Sgt. Richard Lewis of the Santa Monica Police Department, the pursuit began at the Vons market on Wilshire Blvd where police officers had been called to the scene and were detaining a female for a theft.

“At 2 to 2:15, (the department) received a radio call that around the Vons market at 1311 Wilshire Blvd and they were detaining a female,” said Lewis.

Around that time, “one or two male suspects confronted an employee of Vons,” said Lewis.

According to Lewis, during that confrontation a male suspect pulled out a handgun and pointed it at the victim before deciding to flee the scene.

SMPD picked up the vehicle and a pursuit started. During the pursuit, an LAPD airship assisted. The pursuit went from Santa Monica into the Venice beach area.

There was an item that was thrown from the window around S. Centinela Ave. and Pearl Street.

“That’s where evidence was thrown out the window and it was recovered,” said Lewis.

That item turned out to be a gun and was recovered by the Santa Monica Police Department around 3:30 p.m.

According to Lewis, “the passenger bailed out somewhere around the boardwalk and Breeze.”

The male suspect ran off while the driver in the vehicle continued to flee the police.

The entire pursuit lasted for about an hour and ended near the Santa Monica Airport at the cul-de-sac at 25th and the airport near the fire station.

Police are still looking for the passenger who “bailed out” of the car.

Anybody with information about the individual in question can contact the SMPD Criminal Investigations Division at 310-458-8451.