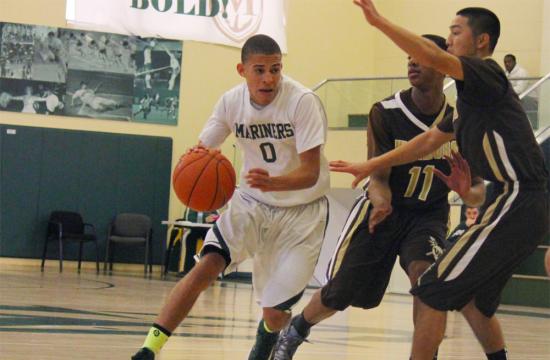 St. Monica struggled to find a rhythm during their 48-36 loss to West at home Saturday afternoon in a game that represented the final tune-up for the Mariners before entering league play.

Mariners guard Dennis Ashley thought that St. Monica had a “tough day,” and that the Mariners needed to make more improvements to get open on shots.

St. Monica Basketball Head Coach Khi-Min Jung thought that the Mariners needed to make more shots in order to win games against opponents to have a successful 2013 season.

“We played hard and our defense was pretty good,” said Jung. “But we really couldn’t hit that many outside shots and manufacture enough points.”

St. Monica just came off a tough loss to Bishop Amat 37-36 the night before in a game where Ashley was on fire scoring the majority of the points for the Mariners sinking numerous three-point shots.

Against West, many of his three point attempts failed to find their way in the basket and he was held to nine points in the game converting only two three-point shots.

Nevertheless, St. Monica battled throughout the game keeping the game close during the first two periods with a shot by Darius Randall to put the Mariners within three at 15-12.

But without the hot hand of Ashley, the Mariners were unable to fend off the onslaught of the Warriors who relied on the aggressiveness of 6′ 8″ big man Terrell Carter to remain ahead.

“We got open looks and the big fella took advantage of it,” said Jung.

Intense moment in the match-up came when Carter fouled Mariners forward Ike Udengwu hard landing on Udengwu in a comical-looking piggy back position.

The foul sent Udengwu to the bench a few plays later after Udengwu complained about back pains.

Udengwu didn’t return to the game and could be seen stretching his back for the remainder of the game.

Without Udengwu, Carter only found it easier to pound through the Mariners defense and score points on offense to secure the win for the Warriors.

Next game for the Mariners is a league match in the Camino Real League against St. Paul at home Wednesday night at 7 p.m.