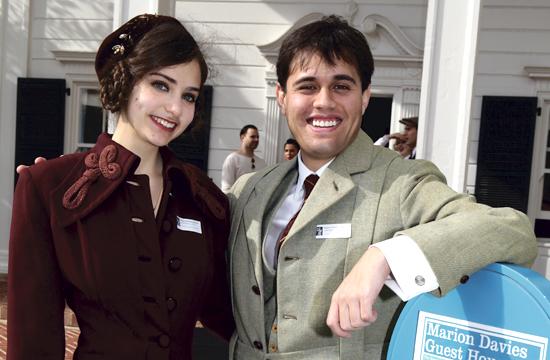 The Annenberg Community Beach House was a really fun place to be on Sunday, Jan. 6. About 300 people were there to celebrate the anniversary of the birthday of Marion Davies. It was a party but it was also serious. We were there to honor our City history, the buildings of Julia Morgan, the success of the new Beach House and the famous Santa Monica resident Marion Davies.

The Santa Monica Conservancy hosted the party. The Guest House, designed by the renowned California architect Julia Morgan, was filled with people in period costume listening to stories of Marion’s life.

As guests sat on comfortable sofas they looked out at the Pacific and listened to Ruthann Lehrer, the Chair of the Conservancy Program Committee. She portrayed Marion’s mother, Rose. Speaking as Rose she said, “Marion was a generous spirit who loved her family. She also loved pranks and could be very silly and she wasn’t interested in school. However she excelled at ballet and tap. With older sisters in vaudeville, Marion decided to do the same. Tall, blue eyed, slender, and vivacious she became a celebrated showgirl with the Ziegfeld Follies.

“William Randolph Hearst was 52 and married with five sons when he spotted Marion on stage,” she said. “She was 18 and dancing with the Ziegfeld Follies and he was smitten. He was to love Marion for his entire life.

“Marion was already an experienced actress when Hearst became interested in the movie business. He started a film company with Louis B. Mayer and Marion Davies became his leading lady.

“In 1924 he bought 750 feet of prime beach frontage, hired Julia Morgan to design the mansion, the guest house and the pool. He built a dream house and he gave it to Marion. He was always giving her fabulous gifts and some would say it was to make up for never being able to marry her.”

Charlie Chaplin met Marion Davies when she was a Floradora girl with the Ziegfeld Follies and starred in “The Floradora Girl.”

“I soon became her good friend,” said Bernard speaking as Chaplin. “We went to parties and dinners together. We made comedic home movies with our neighbor Harold Lloyd. Our friendship pleased Hearst but it also made him jealous. One time he hired a private detective to spy on us and Marion was so angry that Hearst and she nearly separated.

“Hearst was a conservative, a powerful conservative. One out of four Americans got their news from a Hearst source. Louis B. Mayer was a conservative. I lived in America but I was a British citizen and I was a communist. They would talk politics and Mayer would get mean but Hearst stayed polite. Apparently it was okay to disagree politically but Hearst wouldn’t allow any other man to be romantically interested in Marion.

“And of course, many other men were interested. She was so pretty, so fun and so kind. We used to go to the Pier, ride the carousel and the roller coaster. She and Gable and I used to love to drive the bumper cars.”

Marion Davies also loved to dance and, in her honor, swing dance lessons were offered in the new beach house, designed by Fred Fisher to be both modern and yet refer back to the original Julia Morgan design.

All the partygoers got together in the new Beach House to toast Marion with champagne and to share birthday cake.

Marion Davies was a talented and beautiful woman. She was also a good businesswoman and a loyal friend. Throughout her life Davies was a generous philanthropist and would often give money without letting anyone know she was the donor.

Davies lived in a different era and her own times were not always kind to her. She was Hearst’s mistress and that was a scandal. He only published rave reviews of her work and she felt that diminished her as an actress. It contributed to her ending her acting career. Although by that time she had made 29 silent films and 16 talkies.

Carol Lemlein, the President of the Santa Monica Conservancy, said, “Marion Davies frequently gets a bad rap. Yet she was a wonderful person, generous to her family and friends and a great philanthropist.”

I say it’s time to rethink our view of the life of Marion Davies.