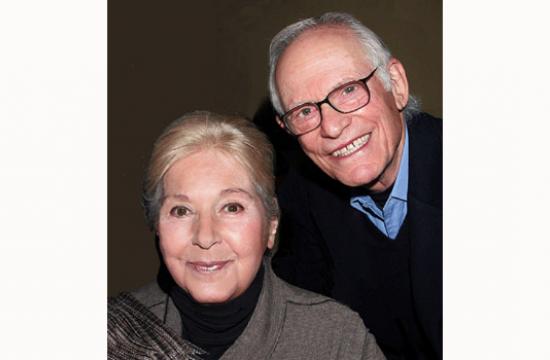 The New West Symphony will present its 2012 Bravo Award to Oscar, Grammy, and Emmy award-winning lyricists, Alan and Marilyn Bergman at a Gala in their honor this Sunday, Jan. 27.

The Gala will take place at the Sheraton Delfina Hotel in Santa Monica immediately following the Symphony’s West Coast premiere of Visions of America – A Photo Symphony at Barnum Hall on the campus of Santa Monica High School.

The work includes music for which the Bergmans are lyricists. The Bravo Award recognizes their extraordinary leadership, contributions to the Visions of America project, and commitment to music education and the performing arts.

The Gala begins at 6 p.m. with cocktails and hors d’oeuvres, followed by dinner and a silent and live auction.

KNBC Channel 4 weathercaster Fritz Coleman will serve as emcee and auctioneer, and vocalists Steve Tyrell and Judith Hill, who are performing on the concert program, will give a special performance for the Bergmans.

Writer-producer Norman Lear and film composers James Newton Howard and Charles Bernstein will be among the Gala’s honored guests, along with other Hollywood and music industry notables. California Senator Barbara Boxer and her husband, Stuart Boxer will also be in attendance.

Tickets for the Gala are priced at $250 per person and include one Premier ticket to the concert. Tables of 10 are also available from $3,000 up and include Premier concert tickets and a personal Tribute Ad in the Gala program.

Tickets may be ordered by calling the Symphony office at 866.776.8400 or online at newwestsymphony.org/events.