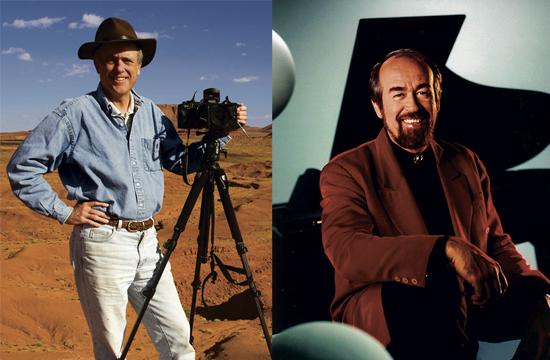 The New West Symphony will present the West Coast premiere of “Visions of America: A Celebration of Democracy” at its third concert of its 2012/2013 Masterpiece Series on Jan. 27 at Santa Monica’s Barnum Hall.

Kellaway, who will serve as pianist for the work, will be joined by vocalists Judith Hill and Steve Tyrell, and the New West Symphony Chorus.

Pianist Norman Krieger, in his New West Symphony debut, will be the soloist for George Gershwin’s Piano Concerto in F Major.

The first performance will take place on Friday, Jan. 25 at 8 p.m. at the Oxnard Performing Arts Center (800 Hobson Way, Oxnard).

The program will be repeated on Saturday, Jan. 26 at 8 p.m. at the Bank of America Performing Arts Center at the Thousand Oaks Civic Arts Plaza (2100 Thousand Oaks Boulevard, Thousand Oaks).

Sohm, one of this country’s foremost photographers, graduated from the University of Missouri with a degree in history and began his career teaching that subject.

In the 1980s, he turned his love and knowledge of history to photography, and he has since created a body of work that is almost unrivaled in capturing the range and essence of the American experience.

In 1996, he created Visions of America, the world’s first global stock photography catalog on America and the first by one photographer, and his images have since appeared in books, magazines, newspapers, advertisements, CD covers, exhibitions, movies, and television around the world.

His work has been displayed internationally in American embassies, featured in former Vice President Al Gore’s Oscar-winning documentary “An Inconvenient Truth” and the adventure-comedy film “Night at the Museum: Battle of the Smithsonian,” seen throughout the Newseum Museum in Washington, D.C., and printed on the face of Bank of America’s “Official Credit Card” for the U.S. Olympic Committee and the Summer Olympics in 2008.

He was commissioned by President Reagan’s U.S. Commission on the Bicentennial of the Constitution to photograph and produce a touring multimedia show titled We the People, and to create, produce and photograph the “Official Inaugural Video” of President Clinton’s 1993 Inauguration.

In 2009, Sohm wrote, photographed, and published “Visions of America: Photographing Democracy,” a 322-page, coffee-table book featuring 1,300 images taken across the country that was featured in a presentation at the National Press Club and won that year’s Independent Publishers Gold Medal Award for Best Tabletop Book.

In conjunction with the book’s publication, Sohm collaborated with Oscar-nominated and Grammy Award-winning composer Kellaway and Oscar-Grammy-Emmy-winning lyricists Alan and Marilyn Bergman in creating the “photo symphony” Visions of America, which was premiered on January 25, 2009 in Philadelphia by the Philly Pops and vocalist Patti Austin, conducted by Peter Nero. The program was repeated in June 2012 with the Boston Pops.

Kellaway has composed commissioned works for orchestra, chamber ensemble, and jazz big band, as well as for film, TV, ballet, and stage productions.

As a composer/arranger, he has received two prestigious honors: a 1976 Oscar nomination for Best Adaptation Score for the film “A Star Is Born,” and the 1989 Grammy Award for Best Instrumental Arrangement for the album Memos from Paradise.