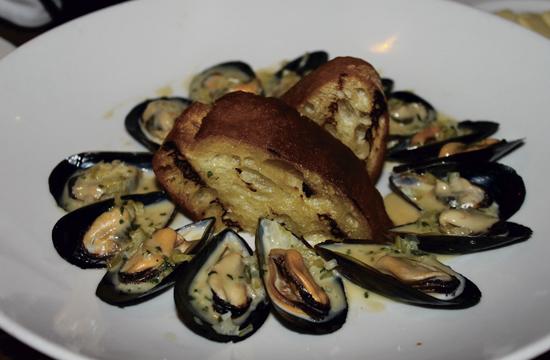 For Ocean & Vine Executive Chef Keith Roberts, developing a winter menu allows him to go back to basics using some classical techniques to create heartier dishes that don’t have to be as trendy as his summer creations.

With the cold weather lingering outside, he said diners are looking for a little bit more of a heavier hand in some of the ingredients when ordering warm winter dishes.

One of his most popular appetizers right now is the Steamed Pacific Blue Mussels, which he steams in Gewürztraminer wine.

“I like that wine because it has a nice herby finish to it,” Roberts said. “It’s not as sweet as your Chardonnays, so it has a heartier flavor when you reduce it now. I like to highlight the sweetness of the mussels. It’s prepared with onion, garlic, and parsley and finished with cream.”

Roberts said coming up with new dishes was one of the favorite parts of his job.

“You never know how it’s going to be received,” he said. “The fun part is sharing those new ideas and seeing how people get excited and go ‘hey, cool, check this out.’”

He uses large day boat scallops that he sears in a pan to begin the dish.

“Scallops have such tender insides,” he said. “If you don’t have a texture contrast on the outside, it can just be a mouthful of mush. We make sure we sear them real good. The pears are Julianne pears that we quickly sautée just enough to get them hot, then we flash them with some brandy and some white balsamic vinegar, then just enough sweet butter to make it wet – not to make butter sauce or anything – but just to keep them moist to let all the flavors blend together. The brandy and the vinegar are absorbed right away in the hot pan, so the flavor goes right inside that pear. We have some wild rice popcorn that we sprinkle on top that gives it a little bit of a crunch to it, then Maggie Farms’ tatsio.”

A new addition to the entrees is the Tehachapi Roast Beet and Butternut Raviolis, which Roberts was inspired to create after eating a ravioli dish at another restaurant in town.

“I’m not a big beet fan, but what this chef did was turn the beets into a flavor that was different from beets: it was so simple and pure,” he said. “Instead of this sweet flavor, he turned it into a more earthy vegetable. We decided to do that with butternut squash and beets, adding in some shallots and a little butter. The simplicity of this dish is so great.”

Another hearty entrée and best seller is the Sonoma Duck Breast, Roberts said.

“What I think is really great about it is that we brine the duck in maple and soy,” he said. “Usually the result of brining is a moister product, which is a good reason for using the technique. Here the maple flavor comes through and it blends so well with the duck. We seared that with the duck fat to keep the flavor. The Wheat Berries, which are white wheat kernels or seeds, are cooked like rice and sauteed with some vegetables and a little bit of orange honey. We serve it with Acorn Squash, which we bake in butter, orange juice, and brown sugar, then we scoop it out and fill it in with a cream egg custard, almost a crème brulee if you will inside. We finish the duck with a, Black Current, glaze that is mostly black currents and a little wine reduction.”

For more information or reservations, call 310.576.3180 or visit www.oceanandvine.com.