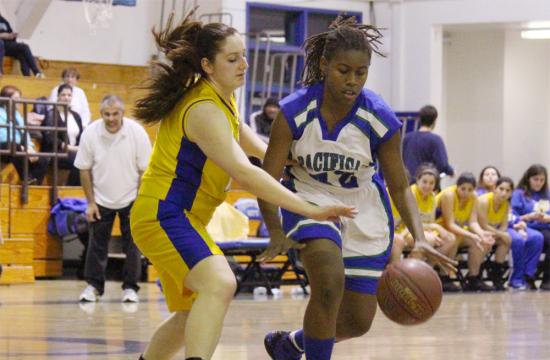 Pacifica Christian (9-10) lost to Holy Martyrs Armenian (12-11) 34-21 in a low scoring defensive battle that ended with the Armens picking up some steam in the fourth quarter to win the game at Culver City High School Saturday night.

Holy Martyrs Armenian Head Coach Varant Vartabedian thought that it was a tough game for the Armens even though they won.

“As expected it was a tough game,” said Vartabedian. “They had a very good point guard and they were big. It was a tough match, a defensive battle on both sides, especially the first half.”

First half the score bottomed out at 11-6 as both teams had difficulty finding the basket.

Pacifica Christian held on throughout the third quarter with a nice shot under the basket by forward Shannon Volpis to bring the Seawolves to within five points at 20-15 with 1:49 on the clock.

But the Armens began to pull away soon after and by the end of the fourth quarter the score was 30-19 with 1:34 left in the game.

The Armens then drained the clock to secure the victory over the Seawolves.

Volpis led the Seawolves with 11 points.

Next game for the Seawolves is away against Yeshiva Tuesday at 4:30 p.m.