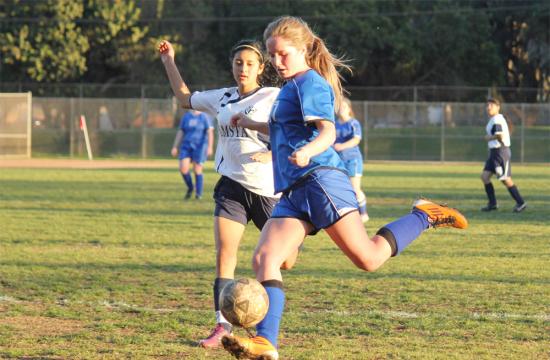 Pacifica Christian (8-0) girls soccer shut out Lennox Academy 4-0 at Marine Park with forward Abby Mcrae leading the offense of the Seawolves scoring two goals in the first half against the Panthers to extend their win streak to six games Friday afternoon.

Pacifica Christian’s Girls Soccer Head Coach Guido Hajenius thought that the Seawolves played “a heck of a game” and was happy with the win.

“We’ve been working a lot with finishing and that’s what they did,” said Hajenius. “They had a lot of opportunities to score and they put the ball in the net but there were definitely opportunities where they could have scored some more.”

The offense of Lennox Academy was non-existent and the Panthers were forced to play defense practically the entire game as the ball rarely made it past mid-field and into the territory of the Seawolves.

Pacifica Christian’s forward Abby Mcrae cashed in on a number of shots taken during the first half scoring two goals with the first coming off of a corner kick and the second off a small lob fired from the left that sailed into the goal untouched.

Hajenius was very proud of the performance of Mcrae.

“Abby has a heck of a shot with her left foot,” said Hajenius. “She knows exactly where to put the ball in the net. Especially that second goal, it was a good pass from our midfield right to her and she was able to put it right in the corner.”

Seawolves Captain Lauren Gaston, who scored the third goal during the second half of the game, thought that Pacifica Christian has been improving the entire season.

“We did well this game because we got to use our other line-up,” said Gaston. “I think we worked really hard and were more aggressive then we usually are so I think that helped.

Gaston believes that the Seawolves have improved dramatically from the previous two years and looks forward to the future.

“I think we have improved by getting more of the freshmen and sophomores to help us out,” said Gaston. “We are obviously a better team then we were last year and I think we are doing really good.”

Pacifica Christian won again Tuesday away against Glendale Adventist Academy. The score was 12-0. With the win, The Seawolves current record is 8-0.

Next game for the Seawolves is away against New Community Jewish Thursday Jan. 24 at 3:30 p.m.