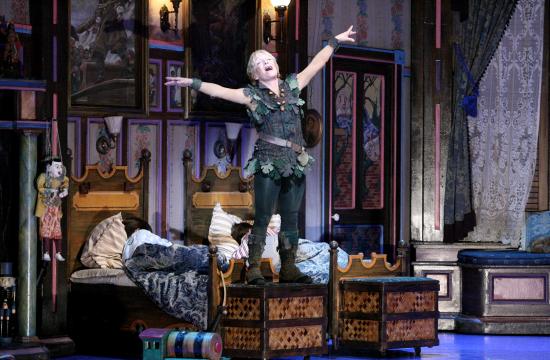 The family friendly production of Peter Pan has arrived at the Pantages Theatre in Hollywood for a two week run with performances through Jan. 27.

Cathy Rigby, the two-time Emmy Award winning and two-time Tony Award, stars as Peter Pan who takes the three Darling children to Neverland after teaching them how to fly in their nursery.

Rigby brings the stage to life, sprinkling fairy dust across the stage while performing amazing aerial acrobatics throughout the show.

On their adventures in Neverland, they encounter the cunning and evil Captain Hook, villainous pirates, a crafty crocodile, and a sprightly fairy, Tinker Bell.

Rigby made her professional debut as ‘Dorothy’ in The Wizard of Oz 29 years ago.

Since that debut, she has starred in a string of national tours including “Annie Get Your Gun,” “Meet Me in St. Louis,” “Paint Your Wagon,” “They’re Playing Our Song” and as the “Cat in the Hat” in Seussical both on Broadway and on tour.

“One of the greatest gifts of my theatrical career has been the opportunity to play Peter Pan,” Rigby said. “The thrill of seeing the faces of children as I fly over their heads sprinkling fairy dust and having the chance to relive the adventure of a perfect make believe childhood.”

This engagement marks the first return of the production to Pantages Theatre in more than eight years.

Joining Rigby is Broadway’s Brent Barrett as Mr. Darling/Hook. Barrett has entertained millions of fans around the world from Broadway to the West End, concerts halls, recording studios, film, and television.

The score remains a favorite of children and adults alike with the show featuring such classics as “I Gotta Crow,” “Neverland” and “I’m Flying.”

Orchestra level tickets start at just $25. The show has a running time of two hours and 15 minutes including intermission.

Tickets may also be purchased in person at the Pantages Box Office and all Ticketmaster outlets.

The Pantages Theatre is located at 6233 Hollywood Boulevard, just east of Vine Street in Hollywood. The box office opens daily at 10 a.m. except for holidays.