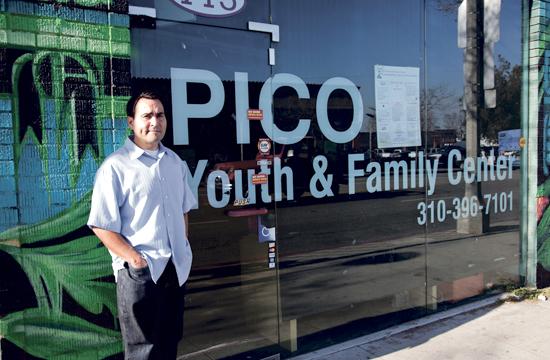 The Santa Monica City Council gave the Pico Youth and Family Center (PYFC) a reprieve in the early morning hours of Wednesday, unanimously voting in favor of maintaining funding for the center through June after more than five dozen speakers pleaded with Council members for the City’s continued support.

In what was one of the longest council meetings in recent years, the PYFC agenda item was not called until Tuesday’s council meeting flipped into Wednesday morning. Several hours earlier, nearly 100 PYFC members and supporters staged a protest inside City Hall’s lobby. Many of those supporters were still at City Hall eight hours later, when Council members finally recorded a vote on the issue just before 3 a.m.

Council member Kevin McKeown’s motion to have City Hall continue funding PYFC through June was unanimously approved only minutes after the public testimony was completed. The decision to continue funding also came with a provision: PYFC must work with outside groups in an effort to improve its practices.

One of those groups: the non-profit Social and Environmental Entrepreneurs (SEE), who assists other non-profits with administrative and financial operations.

However, with a long line of PYFC members, supporters, and alumni speaking to council members about its value to the community, the seven-member Council voted to continue funding the group through June 30.

When the council approved the budget for the 2012-2013 Fiscal Year, City funding for PYFC was approved for just six months. At that time, City Hall had entered into a “Last Chance Agreement” with PYFC, providing the group until the end of this month to “significantly improve (its) performance.”

That agreement was set to expire Jan. 31. City staff decided to recommend the discontinuance of funds after it determined PYFC’s “deficiencies evident for many years have persisted.”

A funding condition of the Last Chance Agreement stated: “The PYFC Board of Directors will implement significant administrative changes to ensure accountability, adequate fundraising, and program development – this includes assessing the feasibility of merging with a larger community based non-profit.”

“Despite the City’s significant efforts to provide assistance and the Board’s commitment to implement improvements, by February 2012 it was clear that PYFC had not developed an effective strategy for making these improvements,” City staff stated. “They also had not identified an organization to merge with and the Executive Director communicated that he did not believe that this was the right direction for PYFC to take.”

City staff had expressed concern, both in its written report and in its presentation during the council meeting, about how PYFC founder and executive director Oscar de la Torre operated the organization.

One allegation: de la Torre received payment from PYFC whilst conducting his duties as a board member of the Santa Monica-Malibu Unified School District.

There were also operational concerns, such as whether PYFC had proper checks and balances in place and a failure “implement sufficient internal controls resulting in incorrect recordkeeping and inaccurate accounting practices.”

During the public testimony, de la Torre had an interesting exchange with council members. His ability to properly administer PYFC was questioned by Council member Kevin McKeown.

PYFC has been funded by City Hall since June 2000. One year earlier, Council members then sought to support an organization “to fill a specifically defined gap in services for the hardest-to-reach, vulnerable gang involved youth in Santa Monica.”

The group’s main focus: provide support to youth between age 16 and 24 who was dismissed from Samohi and enrolled in Olympic Continuation School, formerly incarcerated, identified as a “serious habitual” offender, on parole or probation, or had dropped out of a local school.

However, City staff stated in its report to the council “PYFC has broadened the population of youth and has undertaken social justice and community organizing activities that have diverted program focus and resources away from the original intent of City funding.”

Since 2000, City Hall has provided about $4 million in funding to PYFC, according to staff.