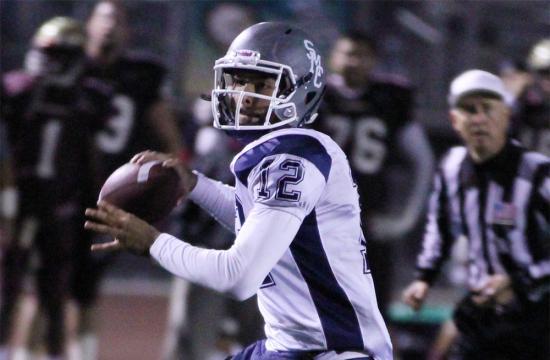 Santa Monica College quarterback Alfonso Medina will be transferring to the division one football program at Weber State University on a full ride next season after a record breaking season playing football with the Corsairs.

“It feels pretty awesome to be an all time record holder at a school,” said Medina. “There was a lot of hard work to make that possible.”

Medina passed for 2640 yards with 30 touchdowns overall during the 2012 football season in a performance to lead the Corsairs on their undefeated run in the Pacific Conference.

Medina attributes his success in junior college football to being a smart player and remembering his mechanics.

“I played with guys that were doing what they’re supposed to be doing from the offensive line to the receivers to the running backs to make some great plays,” said Medina. “It also helped knowing what the defense was doing and where I was going with the ball on each play.”

Maybe it isn’t a coincidence that his well-thought-out style of play on the field has been enhanced by his studies of mechanical engineering and mathematics that he plans to pursue further at WSU.

With two Pacific Conference wins under his belt, Medina might be the next big thing to come out of the SMC football program and will be contending for the top quarterback position while attending WSU.

Medina’s stamina and focus overshadowed his quiet personality and smaller stature while playing with the Corsairs that led the coaches to give this “kid” a chance to shine on the football field.

“I look up to guys like Drew Brees and Russell Wilson,” said Medina. “They’re the guys that don’t have the prototypical 6’4”, 220 pound frame but they prove that you don’t need all that size to play at the highest level and to excel and succeed.”

Medina’s current goals include playing for the National Football League after playing football at WSU.

“What excites me the most is just being able to continue playing and being able to do that in front of a lot of people at a high level,” said Medina.