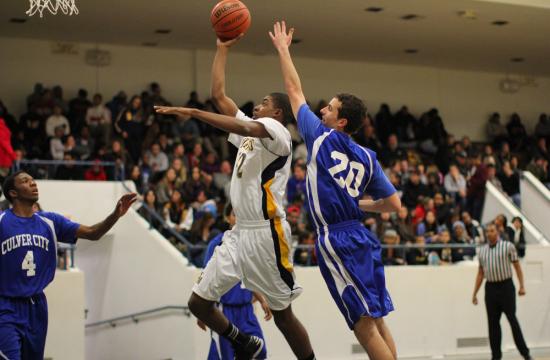 Santa Monica High School (13-4) made short work of rival Culver City (4-12) beating the Centaurs soundly 78-52 where the post dominated the night and the Vikings were afforded the opportunity to utilize their plethora of guards to outshoot, outhustle, and ultimately win the basketball game.

Vikings Basketball Head Coach James Hect thought that the Vikings “post guys did a great job,” and that they dominated “the paint.”

“It’s something we have wanted to emphasize more is to get the ball over to the side,” said Hect. “Our post guys did a great job to start the game running rim to rim and then transition buckets. I think that got us a bit of a cushion and if we want to do anything in league and in the playoffs, we need to get the ball to those players.”

Regardless of the win, Hect thought that the Vikings could have executed the game better.

“It was a little sloppy at times,” said Hect. “I almost burned all my time outs talking about how sloppy we looked and how many free throws we missed. And then I looked up and we had a descent lead so that was somewhat infectious throughout the game and something we got to watch film in.”

Samohi forced a good amount of turnovers to keep the momentum high for the Vikings the entire game.

By the end of the third quarter, the Vikings were ahead of the Centaurs 42-21.

“We’ve got guys who can get up and down the court,” said Hect. “We’re not blessed with huge size but what we do have are guys who can play the post, get out and run, play a little perimeter, and handle the ball. So our versatility can be a big asset to us down the road.”

The Vikings extended their winning streak to three games with a 63-62 win at home against Beverly Hills Wednesday night.

Next game for Samohi is away against Morningside Friday at 7:30 p.m.