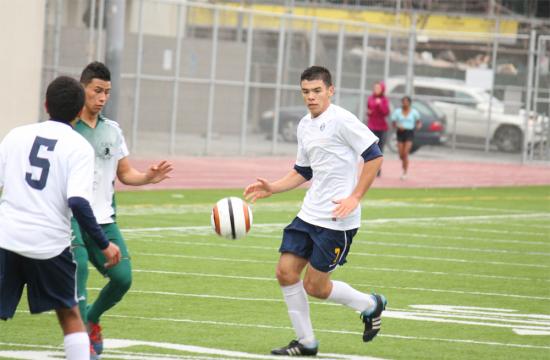 The Vikings Boys Soccer Team (6-8-2) has been struggling this year but managed to pull off a rainy day win against the Inglewood Sentinels in an overtime goal by Giancarlo Canas at home Friday afternoon.

Inglewood broke a 1-1 tie early in the second half with a beautiful bender that sailed into the goal to make it 2-1 Sentinels.

That was the score until the final minutes of play.

With only a few minutes left to go, the Vikings advanced the ball downfield until it found the feet of Giancarlo Canas for the equalizer goal to tie the game at 2-2.

The referees allotted more time to the two teams so the Sentinels and the Vikings could duke out a victor.

Samohi got the best of Inglewood in extra time. Canas, who was hot off his previous goal to tie the game, was able to boot the ball up over the keeper on a shot from the right to win the game 3-2.

Next game for the Vikings is away against Beverly Hills today at 6 p.m.