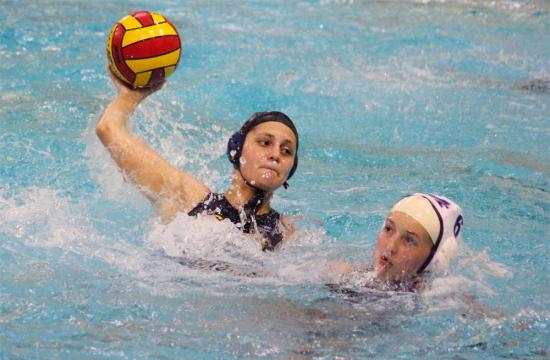 The Santa Moncia High School Girls Waterpolo made short work of Marlborough crushing the Mustangs 17-2 to advance the Vikings to 4-1 in the Ocean League at home Tuesday afternoon.

“Marlborough is a developing team and they have one level so it wasn’t as challenging of a game as say El Segundo or Culver City,” said Flanders. “Right now we dropped a tough one to Culver City last week. It was a game that we were in a position to win but we made a few mistakes and they are a good team so you can’t make a few mistakes.”

Vikings captain Jessie Espera, who scored six goals against Marlborough, said the Vikings played well against the Mustangs and have had a good season.

“We got to know each other through team bonding throughout the season,” said Espera. “We’re not just a team, we are really good friends and the happier we are with each other, the better our games go.”

The Vikings struck hard and struck fast against the Mustangs and by the middle of the second period Molly Wittels had pushed the Vikings up 10-0.

Espera then scored easily off a triple pump with 5:06 left in the third period to push the game up to 11-0 before the Mustangs were able to respond with two points but the Vikings kept attacking popping in more points to extend the lead.

With 3:42 left in the game, Rashel “Chum” Alvarez-Zakson launched in a point to extend the Vikings lead to 16-2.