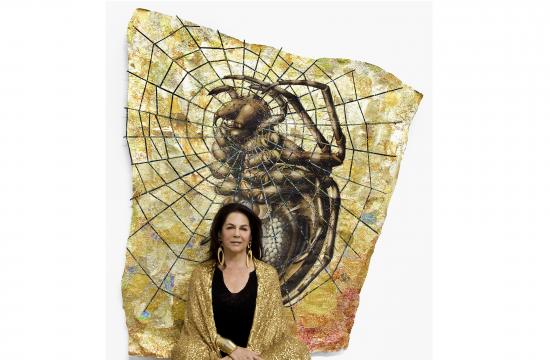 The Santa Monica Museum of Art (SMMoA) will host an opening reception tonight that’s open to the public to celebrate its new winter season of exhibitions from 7 p.m. to 9 p.m.

In the Main Gallery, “Abundance and Devotion: The Art of Miriam Wosk” is the first major survey exhibition of the work of this acclaimed local artist through April 20.

In Project Room 1, “Tea for Two Hundred” is an exhibition of giant teapots by well-known Los Angeles artist Peter Shire through April 3.

In Project Room 2, “Samira Yamin: We Will Not Fail” is Yamin’s debut solo museum exhibition through April 20 that revolves around the October 1, 2001 issue of TIME magazine, the first instance of Osama Bin Laden on the magazine’s cover and the first issue dedicated entirely to the “war on terror.”

SMMoA executive director Elsa Longhauser said this was the second time Wosk’s work had been on show at the Museum.

In 2006, the Museum presented “Euphoria: Paintings by Miriam Wosk” in Project Room 1.

“Miriam Wosk’s work was created with a ferocious sense of beauty and purpose,” Longhauser said. “Although lush and exuberant, it is tempered nonetheless by a poignant awareness of mortality. She was sensitively attuned to counterpoints: The molecular and the cosmic, the visceral and the spiritual, the chaotic and the harmonious – all of which create the tension and transcendence that define her work.”

“Abundance and Devotion” presents a selection of the large-scale, intricate paintings and collages for which Wosk is best known. These vivid canvases, often covered with pearls, crystals, collaged images, and other ornamentation, explore the connections between nature, human consciousness, aesthetics, and spiritual transcendence.

A selection of original illustrations, published works, and cover designs from Wosk’s early career as a commercial illustrator in New York will also be on view. “Language of the Soul,” the short film by Terry Sanders about Wosk’s life, will run in the back gallery accompanied by the artist’s elaborate scrapbooks, which were critical to her process and a treasured source of inspiration.

The exhibition includes several striking examples of Wosk’s most recent work prior to her death in Santa Monica in 2010. Composed of foil, anatomical charts, wallpaper, and other materials, these large collages depict gigantic animals against glistening backgrounds.

Many of Wosk’s animal and human subjects are pregnant; motifs of the female body recur frequently, appearing as early as her iconic cover for the first issue of Ms. magazine.

Meanwhile, in Project Room 1, “Tea for Two Hundred” highlights eight large-scale teapots, ranging in height from two to six feet tall. These imaginative objects, made of clay, metal, wood, and found materials, are some of Shire’s most inventive works.

They will be installed in a whimsical landscape – sparking the imagination with a playful dialog between the viewers’ bodies and the teapots.

The teapot, an iconic form in the artist’s work, characterizes Shire’s spirited aesthetic and distinctive style.

Throughout his career, he has continually reinvented the object, using it as an armature to experiment with material, scale, and function.

Longhauser said these eccentric giants are both unlikely and ingenious.

“They resist categorization and are charming, unwieldy, and fitful in their usefulness and uselessness,” she said. “We are pleased to show Peter’s work. His singular style encompasses both international and local perspectives – with roots in the Milan-based Memphis group combined with the multitude of influences he has absorbed from living and working in Los Angeles.”

Shire was a friend and peer of Miriam Wosk. Shire’s work is in Wosk’s collection, and one of the extraordinary teapots she owned will be included in “Tea for Two Hundred.” The parallel presentation of the two artists’ work speaks to the inspiration and local community they shared working in the realms of art and design.

To round out the new winter season of works, Project Room 2 highlights the works of Samira Yamin.

Yamin’s hand-cut latticework repeats geometries that, in Islamic culture, represent the underlying and infinite structure of the universe. The patterns evoke both the decorative and the divine.

Exquisite in design and subversive in content, the works in “We Will Not Fail” hold aesthetic beauty and terror in precarious tension.

The Museum is open Tuesday through Saturday from 11 a.m. to 6 p.m., closed Sundays, Mondays, and all legal holidays. Suggested donation: $5; $3 for seniors and students. For more information about exhibitions and programs, call 310.586.6488 or visit www.smmoa.org.