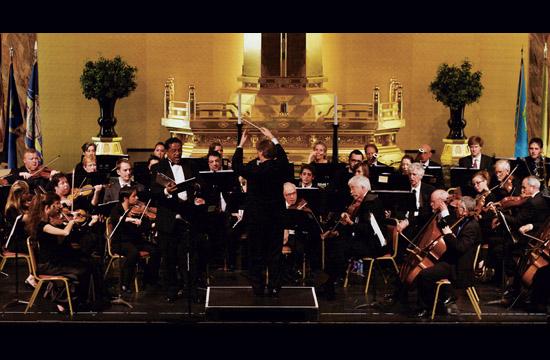 The newly-reconstituted Santa Monica Symphony and Music Director/Conductor Guido Lamell honored Dr. Martin Luther King, Jr. on a warm Sunday afternoon in a concert of fun and innovative programming that reached beyond the usual works for this day, demonstrating the creativity and talent Santa Monica both deserves and contains in abundance. Future concert-goers will be in for many treats from this team.

The sounds of two fanfares, the words of Dr. King set to music, the camp song Kum Ba Yah – yes, that song – (in orchestral setting), and a poem for the occasion (written by the music director) inserted into Dvorak’s mighty 9th Symphony, filled the SGI Auditorium in downtown Santa Monica with celebration and remembrance.

The first fanfare – Aaron Copland’s stirring “Fanfare for the Common Man” – opened the program with a brilliant display of the combined brasses.

Common in their origin as religious music, the two works were very different. The first, “Three Spirituals for Orchestra,” included “Kum Ba Yah” (now in orchestral setting) which actually is a 1930s spiritual from the Gullah region of the Sea Islands off the Carolina coast. In this orchestral setting the melody becomes a haunting prayer, played beautifully, first by English hornist Larry Tunick, then by clarinetist Wendy Mazon in a truly soulful rendition.

The second Hailstork piece was “Fanfare on Amazing Grace,” again, a very familiar religious piece creatively reframed as a celebration with more of that brass virtuosity. I’d like to hear more from this composer.

The concert’s first half highlight was baritone Ralph Cato singing a section of Dr. King’s “I Have a Dream” speech set to music by American Lee Hoiby (1926-2011). Despite a cold, Cato put drama and passion into this enormously challenging text. We and the orchestra rewarded his bravura performance with a standing ovation.

The program’s second half was Antonin Dvorak’s majestic 9th – the New World – Symphony, with a twist. Dvorak’s student William Arms Fisher, inspired by the second movement, wrote the memorable song “Goin’ Home” long ago. The use of Lamell’s new poetry, matched perfectly to the music as a song, was possibly the first time the symphony was performed with words to replace the horn solo. Ralph Cato was called upon again and brought it to life with a moving performance.

Lamell joked with the audience before the concert that Dvorak himself might have used similar words if only he had the right librettist. I agree, and thought it so moving that I’m reprinting the poem here, with Lamell’s permission. Feel free to sing along at home.

Indeed, it’s a beautiful new world, one I think Dr. King would have liked.

far from home of old

come in from the cold

Here the muse urges me

Here in this distant land

I can write what I hear

Worship Him as I please

He has heard my cry

all can call this home

I have found my home.