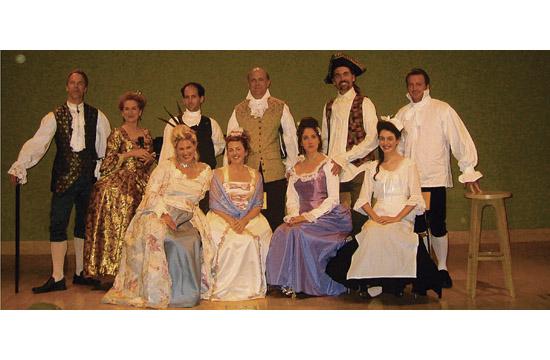 The Santa Monica Bay Woman’s Club will be transformed into a 17th-century French Salon this Saturday, Feb. 2 to raise funds for Santa Monica Rep’s upcoming 2013 season.

This will be the second benefit the emerging company has held at one of the City’s cultural and historical landmarks, after presenting a 1940’s evening of Brecht-inspired theater at the playwright’s former Santa Monica home in November 2011.

The event starts with a mix and mingle at 4 p.m., where guests will be able to make masks, have their hair coiffed, take part in a silent auction and raffle, and listen to live music.

The evening’s primary entertainment will begin at 5 p.m. with a fully-costumed staged reading of Moliere’s “The Learned Ladies.”

“Our first benefit in November of 2011 was held at the Brecht House on 26th street, and featured all Brecht-themed entertainment and storytelling,” Bloom said. “We thought it would be a great tradition if each successive benefit focused on an important historical figure in theater history. Then, over this past summer we had a hugely successful reading of Moliere’s ‘The Learned Ladies’ as part of our six-month long series with the Santa Monica Main Library, and decided it would be a great centerpiece for this benefit. So the alchemy of needing an entertaining theatrical figure to pair with our benefit and already having had the framework for a Moliere offering made it a perfect choice.”

He said he was hoping guests go all out and come in their best French Salon get up.

“We realize 17th-century garb is not something every person has in their closet, but we’re encouraging everyone to just have fun with the whole French theme and use any era or creative interpretation of said era to inspire their choices,” he said. “Costumes are encouraged, but of course, completely optional.”

He said Santa Monica Rep is building a local professional theater company that will serve this community through artistic programming and outreach for a long time to come.

He said it could only happen if community members recognize the inherent value in helping to support and sustain such a company.

“We want to create a place for engagement and community,” he said. “Santa Monica is just brimming with the potential to be a real theater town, and we tend to choose plays that fill a different niche – based on the regional theater model – than other successful companies in town.”

He said all of the proceeds would go towards seeding Santa Monica Rep’s upcoming season.

“Each production has different requirements, but whether it’s rental costs, artist fees, administrative upkeep, or materials, or the myriad things that always tend to arise when making theater, we’re always conscious of the need to do as much as possible out of limited resources,” he said. “The more we raise at the Salon, the more we are able to do, and the better we’re able to execute it. Aside from the ticket prices, guests will also be able to bid on dozens of silent auction items, ranging from Pilates classes to theater tickets to high end perfume and jewelry, and take part in a raffle to win a pair of lifetime tickets to SM Rep productions.”

Parking is available for $5 in the structure next to the Bay Woman’s Club at 1234 4th Street.