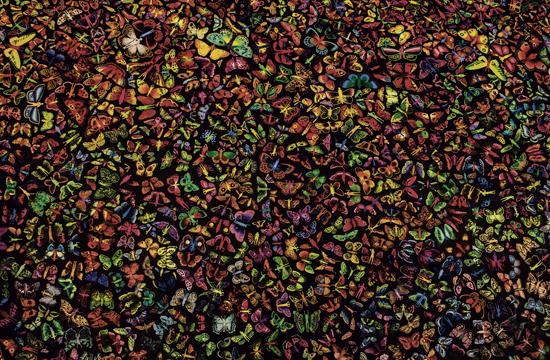 Artist Zadok Ben David’s work over the past two decades has explored the relationship between man and nature.

He is interested in utilizing metal; in this specific case, aluminum and stainless steel to point towards an exploration of nature as symbolic of the moment of discovery.

This weekend, David will present his second solo exhibition with Shoshana Wayne Gallery, which is located at 2525 Michigan Avenue at the Bergamot Station Arts Center.

In the current exhibition, David is showing new work themed around the butterfly.

The butterfly represents the last link in the chain between man and the natural world.

In the main gallery, there is an installation of one circle with two disparate sides.

The three-meter form is composed of more than 2,000 miniature butterflies and insects; each meticulously hand painted in bright fluorescent colors.

Suspended in a darkened space and viewed only under UV light, one can bear witness to the shifts in imagery when contemplating one side versus the other.

“The Other Side of Midnight” challenges perceptions of beauty on the one hand, and repulsion on the other; two seemingly different concepts that are quite closely connected via the nature that surrounds us all.

In the smaller gallery, David shows sculptures comprised of small butterflies and people within the larger forms of figures and circles.

David, who lives and works in London, has had his work shown extensively in Europe and Asia.

He is currently featuring large-scale outdoor work in the Singapore Botanical Gardens.

Among his other accolades, he represented Israel in the Venice Biennale in 1988, he is the recipient of both the Grande Biennial Premio at the XIV Biennale Internacional de Arte de Vila Nova de Cerveira, Portugal 2007 as well as the Tel Aviv Museum prize in 2005. He has had exhibitions in The Tel Aviv Musem titled Human Nature in 2009; Living in Evolution in Busan Biennial in 2010, South Korea; Wonder Singapore Biennale 2008 and at the Biennale Cuveé 2009 in Austria, among others.