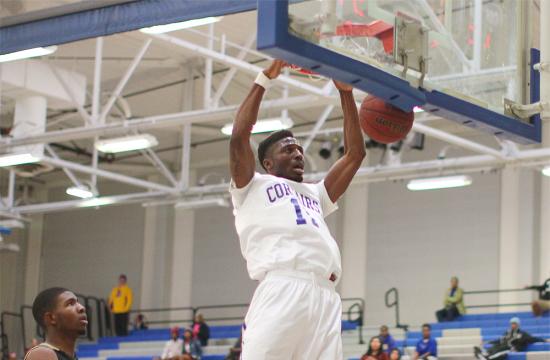 Santa Monica College (10-6) beat LA Valley(3-12) in a game where the Corsairs found themselves trailing by fourteen points in the second half at 59-45 but came back to win the game 79-72 at home Saturday afternoon.

Corsairs starting guard and captain Madison Higgins, who led the charge in the fourth quarter, thought that the Corsairs played well especially for being an all-freshman team.

“We are young and as a captain I got to lead the team as far as intensity,” said Higgins. “But I wouldn’t be able to do things I do without my team.”

It was then that guard David Nwaba went to work drawing a foul for a free throw before making a massive two-handed dunk off of a fast break.

The defense of the Corsairs held steady and gave Horton another chance at a long bucket which he made before being drawing the foul and falling backwards on the floor.

With the three point play conversion at the line, he put the Corsairs within five to make the game 59-54.

Horton then sunk another long basket from the far left side to bring the Corsairs to within three at 59-56.

LA Valley managed to squeeze in a bucket but Nwaba drew another foul while driving up the key and made both his free throws to keep the game within three at 61-58 before coming up with a massive block on defense to lead the charge back down the court and add in another free throw of a foul.

With the game within two, Higgins made a clutch shot to tie the game up at 61-61 completing a 15-2 comeback drive.

LA Valley then made their second basket in the quarter but Higgins hit another three and the Corsairs took the lead at 64-63.

Nwaba made the next three points to up SMC’s lead by five before the Monarchs could recover but by then it was too late and the Corsairs held on to win the game by seven at 79-72.

“We’re just trying to come up and win this conference,” said Higgins. “It all starts off with the bench and bleeds over to the on court activity. Everybody plays their role, everybody steps up, and we get things done as a unit.”

Nwaba had 28 points while Horton finished with 20 and Higgins with 13.

The Corsairs continued their win streak with a victory against Glendale College 77-71 Wednesday night and with the win the Corsairs are now the number two seed in the Western State South Conference.

Next game for the Corsairs is at home against number one seed Canyons (13-6) on Wednesday Jan. 23.