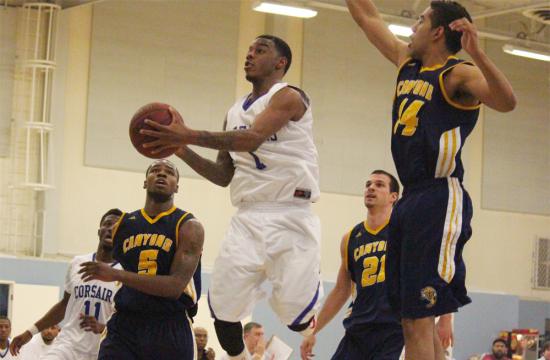 SMC Men’s Basketball (10-6) lost to Canyons (14-6) 84-74 at home Wednesday night in a game where the Corsairs found themselves unable to catch-up after a 12-0 run late in the fist half by the Cougars.

Canyons advances to first place at 4-0 in the Western State South League while SMC drops to third place at 2-2.

Canyons Basketball Head Coach Howard Fisher thought that the Cougars did a good job shutting down the attack of Corsairs forward David Nwaba and the three-point threats of SMC’s shooting guards.

“We talked about rebounding and how that was going to be a key in taking away the penetration,” said Fisher. “David Nwaba did a good job of keeping them in the game but they didn’t have as many three’s in the second half as they did in the first half.”

Nwaba was held to eight points in the first half and finished with 22 total points. The only other Corsair in double digits was shooting guard Madison Higgins who scored 12 total points.

In order to keep SMC from scoring three point shots, Canyons changed up their defense constantly to keep the Corsairs on their toes, and this strategy kept Corsairs from surmounting a successful comeback.

“In the second half we started switching and I think that kept us one step ahead,” said Fisher.

The Corsairs found themselves down 77-64 with 3:23 left to play in the second half and were able to close the point gap to 79-71 with 1:30 left in the game under the paired leadership of Higgins and Nwaba.

SMC’s DeAndre Henderson then made both his free throws after being fouled by the Cougars to put the Corsairs within six at 79-73 with 1:12 left on the clock.

But right as a comeback seemed geared towards fruition, Nwaba recorded his fifth foul and was taken out with 48.9 seconds left in the game.

Without Nwaba at the helm, the Corsairs were unable to complete their comeback and the Cougars held on to the victory.

“I think everybody contributed to slow Nwaba down,” said Fisher.

Next game for the Corsairs is away against Citrus College Saturday at 5 p.m.