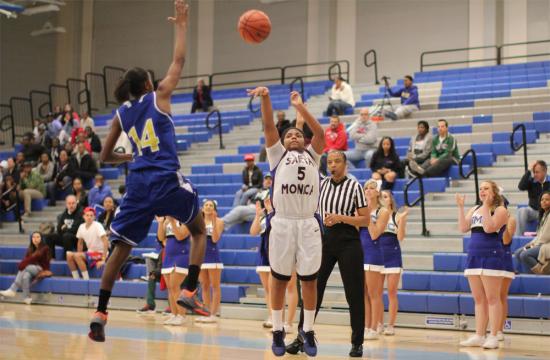 The cross town rivalry was tight with the SMC Corsairs (8-10) clinging to a one point lead over the West Los Angeles Wildcats (11-5) 23-22 at halftime, but West Los Angeles came back to win the game 56-51 after the Wildcats outscored the Corsairs during the final seconds of play in the SMC Pavilion Saturday afternoon.

West LA’s Assistant Basketball Coach Reginald Snell thought that the Wilcats were “fortunate to listen and just play good defense,” against the Corsairs.

“They did a really good job in the zone defense and they made it really hard for us by contesting shots,” said Snell. “But I think just wearing them down and trying to get out of the transition into the second half helped us out.”

SMC’s Anise Palmore sunk a three-point shot against the Wildcats with 2.8 seconds left in the game to cut the lead of the Wildcats to two points at 53-51.

But the Wildcats Ashley Bruner and Jade Neal were able to convert their foul shots for points to secure the victory for West Los Angeles.

“I think the key is that everybody is going to make their runs but I think it’s just weathering the storm,” said Snell. “They contained us and made easy shots but we weren’t making those easy shots so I think we just tried to get it all together and calm down. And when we calmed down, we were in good shape.”

Next game for the Corsairs is away at Glendale College Saturday at 5 p.m.