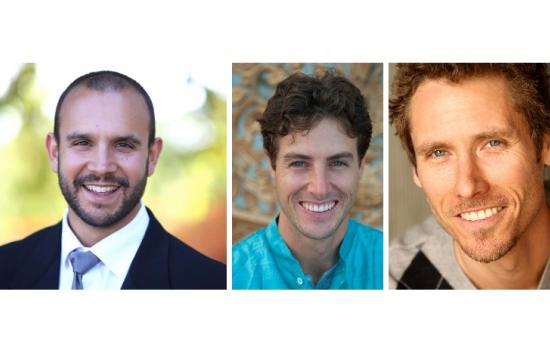 Fireside at The Miles will feature Spirit of the Beach Variety Show featuring Sean A. Mulvihill, Ian Hoge, and Scotty Wells. This evening of variety performance is sure to tickle your funny bone and make your feet stomp!

It will be held at the Miles Memorial Playhouse, 1130 Lincoln Boulevard, Santa Monica.

He attended the University of Southern California’s School of Theatre in Los Angeles and received a BFA in Acting, but more importantly, he learned how to act, which is synonymous with learning compassion for the inner workings of all people.

Lora Zane, a gifted instructor, turned him on to the teaching of Eckhart Tolle, and the new vocabulary with which Sean could use to describe his own awakening was quickly turning into a “life’s work” type of video project.

In 2004, at the age of 23, Sean’s idea for a film about enlightenment—did it truly exist?—blossomed into the HD docu/drama feature film, Living Luminaries: On the Serious Business of Happiness (also titled The Awakening of Sean Mulvihill), produced by Wanna Be Now, LLC. On the production, Mr. Mulvihill served as creator, co-writer, co-producer, and as the on-screen host who navigates the viewer on a journey toward happinesss.

The film is currently in domestic DVD release from Beyond Words, a division of Simon and Schuster, with foreign sales by Fortune Features. Hollywood Happiness was born in a dream on a May morning in 2010, and the vision of “cooperative, inspiring film production” has been in place ever since.

Ian Hoge is a singer/songwriter who has been writing music for over ten years, with placement on TV shows and soaps. Three years ago he decided to release his first album, “I Choose Love.” As Ian says, “I finally had something I to write about that I was proud of. I wrote these songs as a service to mankind, to do my part in spreading love and healing. If even just one person feels a little more love in their heart after listening to one of my songs, then my heart is full. “He has just released his second album, “Warrior’s Song,” which is available on itunes and CDBaby.

Scotty Wells is an ambassador of the New Paradigm. “Not only do I believe in the New Paradigm, I am helping to bring it about.” Scotty teaches transcendence through the thorough examination of the universal law “love is all there is.”

As with all evening Fireside performances, doors open at 7:15 p.m. and the performance begins at 8 p.m. Tickets are $5 for youth/seniors and $10 for adults.