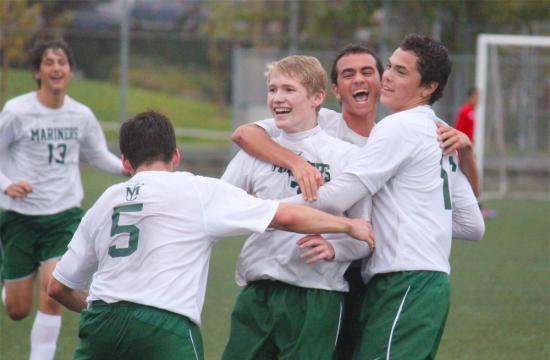 St. Monica Soccer Head Coach Rimal Patel thought that the Mariners did well to weather the storm and win the fight against the Swordsmen during the second half.

“In the second half, they switched around and it was great to see them come back,” said Patel.

“Jack Cain is a versatile player as a defender and as a forward,” said Patel. “He’s got pace. As you can see he scored three goals and he can take any defense on.”

Mariners goalie Adrian Zendejas limited the Swordsmen to only two goals in the second half ending the game with a beautiful header block off of a corner kick to eliminate any chance of a tie by the Swordsmen.

“It’s a new type of season and the effort in practice is crazy and everyone is giving it their all this year,” said Cain.

But even with the win over the Swordsmen, the waters haven’t been all smooth sailings for the Mariners this season.

St. Monica struggled early in the season against division four and division five teams, but Patel believes that this has only made the team tougher now that they are playing league games.

“In the beginning of the season, we definitely got our work cut out on defense and that’s what made us strong,” said Patel. “In league we were 6-0 until Wednesday.”

“It was a very tough game away,” said Patel. “It was pretty much the hardest game we had all year. Today, we had our work cut out as we had three of our top players out.”

Even with the loss of some key players, Patel was able to utilize the players who were still healthy to win the game and switch around his best players to utilize them in the best positions against the Swordsmen.

Cain, who was switched from a defender to a forward against the Swordsmen, learned a valuable lesson from the game.

“This game taught me not to give up and always give all your effort no matter what happens,” said Cain.

Next game for the Mariners is at home at Airport Park against Cantwell-Sacred Heart Monday at 3 p.m.