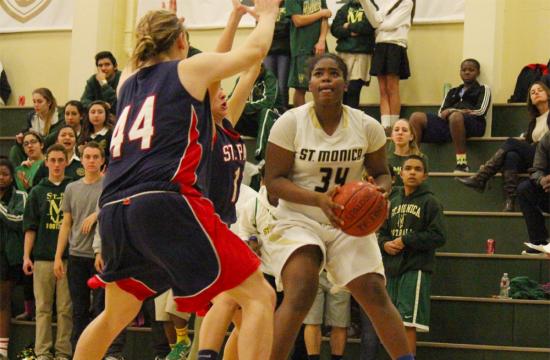 The St. Paul Swordsmen dashed the hopes of the St. Monica Mariners (18-5) winning the clash of the El Camino Real League titans 53-49 for the second time this season where the Mariners looked to pull off their first win against the Swordsmen after coming back to tie the game at 44-44 with 2:58 left to play in the fourth quarter.

St. Monica Girls Basketball Head Coach John Skinner thought that the Mariners had a chance to win but that the referees made some poor calls that distracted the girls early in the game.

“There was some very questionable calls on Briana Harris early in the game,” said Skinner. “That was unfortunate and changed the tide of the game early on. But the kids fought hard and I was really proud at how they battled back from dropping down to score.”

It looked like the Mariners would pull off a nine point deficit comeback in the fourth quarter as they switched tactics and began to gain the momentum after harassing the Swordsmen with a full court press that succeeded in evening the tide by coming back from being down 40-31.

“We’ve really been working hard on the press and we think it’s going to continue to get better,” said Skinner. “Hopefully it will be right where it needs to be for the playoffs.”

Mariners guard Gloria Scipioni began the comeback hitting a nice deuce from the outside before stealing the ball and getting it into the sure hands of Harris who stepped up to sink a three.

Harris was then fouled on her next drive up the middle and converted both her free throws to push the Mariners to within four points at 42-38.

Harris then stole the ball and found Melissa Maragnes under the basket for an easy score which she made but not before being fouled and put on the line where she added a free throw to put the Mariners within one point at 42-41.

The Swordsmen added a basket but it was quickly rebuffed by Harris who scored another three-pointer to tie the game 44-44 capping the comeback.

It was at that point that the Mariners began to slip up by missing their next few opportunities to score whereas the Swordsmen made the best of their chances until they were up 50-44 with 1:39 left in the game.

St. Paul went on to hold onto the victory against the Mariners beating them for the second time this season.

“We outta get our heads back on and keep working,” said Skinner. “We gotta go to Mary Star on Thursday and take care of business and come back hard and try and take care of senior night against a good Cantwell-Heart team before the playoffs. Hopefully we get to play St. Paul again.”

Next game for the Mariners is away against Mary Star of the Sea High School Thursday at 7 p.m.