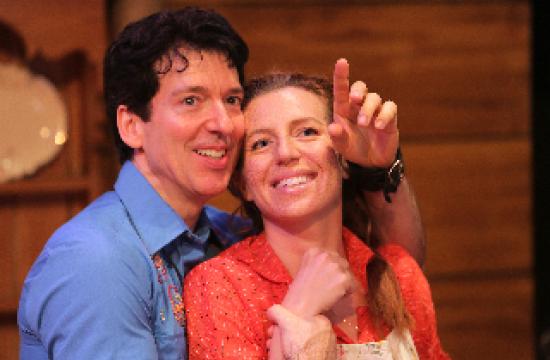 Santa Monica actress Tanna Frederick returns to the stage at the Edgemar Center for the Arts in the “The Rainmaker” as the lead character Lizzie, who lives on a family farm with her brothers and father in the Dust Bowl during the Depression.

The production opens this Friday, Jan. 10 with performances Thursday through Saturday at 7:30 p.m. and Sundays at 5 p.m. through March 24.

In the show, Lizzie capably takes care of the men in her house, but there’s emptiness in her life.

She has no one of her own, and she dreams of a husband and children.

A visit to her cousins, actually a failing attempt to find a prospective mate, has left her more frustrated than ever.

The recurrent reminders that she is considered “plain” by her family and herself do not relieve her fears of winding up as the “maiden aunt.”

The Curry farm, like all those around them, is impacted by a withering and persistent drought. Suddenly, a charismatic stranger named Starbuck (Robert Standley) appears, claiming that he can make the clouds come and the rains fall.

Frederick said Lizzie, to her, was the extra in every western film.

“She is the overlooked girl who is filled with dreams and emotions and hopes that she believes will never be fulfilled,” Frederick said. “Thinking herself plain, in a family surrounded by men who love her because she is their family, she believes that it is impossible out of that circle that anyone will ever care for her or ‘get her.’ And then this strange man enters her life with high tails and fantasies, and magic, and – is it possible – love?”

Frederick said growing up, she was always the plain girl with the huge hair, gigantic eyeglasses, and a substantial nose, so she felt she could really understand what Lizzie had been through as a child and why it is hard for her now to see herself as the glowing, lovely person she has become.

“The work required me to dig back into my childhood and to come out of it again,” she said. “And it’s been quite a challenge.”

Was there one scene in the play the presented a particular challenge for you?

Yes, the height of what I talked about above – the moment that Starbuck looks at me as a real woman and forces me to look at myself the same way. That’s tough stuff.

How familiar were you with “The Rainmaker” before being cast as the lead?

I’d seen the film, and back in college I’d see classmates do scenes from it, but was not familiar with it. But for some reason – maybe it’s not a flattering one – countless people have told me, “You’d be a perfect Lizzie in ‘The Rainmaker’.” I hope I don’t disappoint them.

What do you like most about “The Rainmaker” and why should people come see this production of it?

That everyone can see themselves in it – it has that kind of universal truth. It’s about human beings discovering their worth and fulfilling their dreams.

How many previous productions have you performed at the Edgemar?

I feel like I’ve been acting at the Edgemar all my life. In fact, over the past decade I’ve starred in six plays there, starting with – in the small theatre – a play by Henry Jaglom adapted from his movie, “Always But Not Forever.” Then, the audiences seemed so pleased with that that they offered me a wonderful part in the bigger theatre, “Just 45 Minutes From Broadway,” also by Henry Jaglom. Our film version of that play is currently out in theatres now. The play ran for over a year at the Edgemar – a record, I believe – and one we were all very proud of. Then came “Sylvia” which amazingly also ran a year and in which I got to play a very wonderful dog. The audiences were sensational. At that point, I decided to try my chops at directing, something that has always fascinated me. I had done an offbeat play in college by Claire Chafee and got her to give us the rights to do “Why We Have A Body” at the Edgemar. Amazingly, in this, my first directoral effort, I had the great good fortune to be able to direct Karen Black and Barbara Bain, two of our most brilliant actresses. I played a part in it as well, and so did a lovely new actress named Alex Sedrowski. It’s a complicated play and the reviews were rather mixed, but for me it was an exciting experiment in really creative theatre.

Is there anything else you would like to mention?

Yes. Just one thing. In my pre-Edgemar early days in Hollywood, I happened to star in another play by “The Rainmaker’s” author, N. Richard Nash. A wonderful piece that was done at The Coronet Theatre on La Cienega. I might finally mention my very first starring role on a stage in LA which was in Henry Jaglom’s very first play, “A Safe Place.”

“The Rainmaker” is presented by Henry Jaglom and The Rainbow Theater Company, in association with Edgemar Center for the Arts. The cast also includes Benjamin Chamberlain, David Garver, Ralph Guzzo, Steve Howard, and Scott Roberts.

The Edgemar Center for the Arts